Alien 101: The Valoran
Earlier this week, I introduced readers to my green alien, Lefi the Somian. (you can catch up with him at my blog: http://www.belindam.blogspot.com
Today I’m going to introduce another alien species: The Valoran.
The Valoran are a cerebral, disciplined species that excels in hard sciences and mathematics. They show little humor, but are rampantly curious. The Valoran are somewhat androgynous in appearance, with large eyes and delicate features. They most often have dark hair, though sometimes redheads are seen.
The first Valoran I introduced was Cali Polis over in Belle Starr. She was so intriguing that she’s got her own book in the pipeline, but for now, my Valoran hero is Inspector Afton Teris.
Oh…I forgot to mention…all Valoran are hermaphrodites.  And they have one doozy of an Achilles Heel. They’re highly susceptible to drug addiction.
The race is rigidly divided between male and female, behavior such as same sex attraction is frowned upon. However, a small faction has arisen within the population calling themselves gender neutrals, or Gens. They don’t identify as either male or female, and will take either role in a relationship. However, if they function too long as a specific gender, they begin to tip out of balance both mentally and physically.
Inspector Teris…Afton…views himself as male, though he doesn’t remember ever making that decision. So when he finds himself physically attracted to the very male Lefi Dhrahn, he’s very distressed. And it isn’t that Lefi the Bacchi is gorgeous and decadent, but he’s got a good, though broken heart.  Though it’s hard to resist Lefi’s charms, Afton manages fairly well, until he finds himself in the Bacchi’s home, wearing nothing more than a red silk robe… 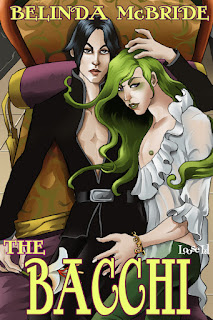 BLURB:
The Bacchi Lefi Dhrahn lives a life of luxury and decadence, but is tortured by memories of a lost love. He survives the pain by surrounding himself with sex, beauty and all forms of self-indulgence. When he meets the alluring Inspector Afton Teris, Lefi believes the detective will make a very nice addition to his string of conquests.

He doesn’t count on falling in love.

Afton Teris is a Valoran hermaphrodite and like all members of his species, is stern, cerebral and disapproves of the frivolous prostitute. Afton orients as a male, but the beautiful Lefi Dhrahn stirs him sexually, making him question everything he knows about himself. To further confuse his emotions, Afton finds himself tempted by the forbidden pleasures surrounding the Bacchi.

When a kidnapping ring strikes close to home, the two go undercover on a brothel barge to investigate a slavery operation. There, Lefi is confronted by painful memories from his past, while Afton is faced with a horror that threatens his future, and perhaps his very life.

Their survival lies with one another, but only if Lefi can set aside his pain and listen to his heart.

The Bacchi releases July 31st at Loose Id: http://www.loose-id.com/the-bacchi/
Bio:
Belinda McBride lives in far Northern California with her family and a pack of perpetually shedding Siberian Huskies. She writes speculative fiction, m/m as well as other flavors of erotic romance. She is an EPIC finalist for several books and a 2012 winner with her m/m paranormal Blacque/Bleu.  Her m/m science fiction romance An Uncommon Whore was the 2011 Passionate Plume winner.
When Belinda isn’t writing, or thinking about writing, she can be found making soap, taking a dog to a dog show, or making plans to hit the road.
Please visit her at http://www.belindamcbride.com
Or at: http://www.belindam.blogspot.com