How did you start your writing career?
By teaching myself to type on an old typewriter my aunt had left at my grandmother’s house. Reading DRACULA at the age of twelve inspired me to pick up all the horror fiction I could find in the public library and start buying paperback horror and fantasy when I could afford it (mostly with birthday and Christmas money, but at that time $5.00 bought more than ten paperbacks). Since I could never find enough to read, I decided to start writing horror. What I really wanted, though, were stories from the “monsters” viewpoint or at least sympathetic to the monster, focusing on human-nonhuman relationships. Those weren’t easy to find in the 1960s. So I unearthed a high school textbook left over from my aunt’s beginning typing class and worked through the exercises on my own. While I never got proficient enough to be considered an expert typist, thanks to that book I’ve always used the touch system. I “practiced” by writing stories, starting at age thirteen. The first was about a tragic romance between a man and a ghost. The third was a single-spaced, thirty-plus-page story in the form of a diary of a man unwittingly changing into a vampire. Vampires remained my first love for decades, and I wrote that early story as journal entries because from DRACULA I got the idea that the epistolary structure was THE way to write horror fiction.

Tell us about your favorite character from your books.

That would be Roger Darvell, protagonist of my first vampire novel, DARK CHANGELING, and its sequel, CHILD OF TWILIGHT. Roger, a psychiatrist, suffers from a dark thirst and a very strange midlife crisis. At the age of forty, he discovers what he always thought was a pathological obsession with blood is actually the result of his mixed heritage as half human and half vampire. Just when he discovers the existence of vampires and the truth about himself, a rogue vampire targets Roger, his patients, and his partner, female psychiatrist Britt Loren. Two secondary characters in this novel date back to that first vampire tale I wrote at age thirteen. DARK CHANGELING, which also includes a romance subplot between Roger and Britt, is the first book in my “Vanishing Breed” universe about a naturally evolved vampire species. Most of the works in this series can be read on their own in any order, and complete information can be found at the “Vanishing Breed” link on my website, Carter’s Crypt:

I also have a newly released story collection, DAME ONYX TREASURES: LOVE AMONG THE MONSTERS:

Also, in May I have a new vampire romance (non-erotic) forthcoming from Amber Quill Press (http://www.amberquill.com ). PASSION IN THE BLOOD is a stand-alone novel in the Vanishing Breed universe.

When was your first sale?

In 1970, in my early twenties, I sold an anthology of vampire stories, CURSE OF THE UNDEAD, as a paperback to Fawcett. I had never seen a vampire anthology in print (though, as I found out soon after the book was accepted, a few did exist, nothing like the abundance of today) and thought a compilation of classic and modern stories in chronological order was just what vampire fans needed. I included an introductory historical overview and a brief timeline of important works. At the time, I was in college and had never had anything published before, except in my high school’s newspaper. I got the publisher’s address from WRITER’S MARKET at the library. I knew nothing about submitting manuscripts except that they had to be double-spaced and accompanied by a SASE. I think I did figure out on my own that an anthology submission should be a proposal package and didn’t have to include photocopies of all the stories first off. About a year went by without a reply from Fawcett. I finally sent them a humorous “why haven’t you written?” greeting card. (See, I knew almost nothing about the publishing business!) They responded by apologizing for the delay and accepting the book. As you can tell from this anecdote, selling anthologies was MUCH easier then than it is now. (In later years, when I had a track record as an author, I sent out anthology proposals with no success whatever.) Immediately after CURSE OF THE UNDEAD was released, Fawcett accepted a second anthology, DEMON LOVERS AND STRANGE SEDUCTIONS. Neither one earned out its advance, but it was a great thrill just to have them in print. And I learned a lot about publishing from the experience. Used copies of both paperbacks can easily be found online.

Usually in the afternoon, sometimes in the late morning. When actively working on a project, I write for two hours or 1000 words, whichever comes first. Of course, if I get on a roll and exceed 1000 words in a session, that’s great. I try to write at least five days a week (again, when actively working on a project; this schedule doesn’t strictly apply at the research and outlining stage). Producing 1000 words per day generates the draft of a novella in a month or a standard-length novel in not much more than three months. I consider myself a slow writer, so contemplating this math reassures me.

The first draft. I have a lot of blank screen anxiety. Unlike some writers (such as Isaac Asimov) who enjoy the act of writing itself, I seldom do. That’s one reason I outline in detail. The more progress I can make on a piece while still fooling my brain that I’m not really “writing,” the easier it is.

Hard Shell Word Factory as a division of Mundania (www.mundania.com ), Amber Quill Press (www.amberquill.com), and Ellora’s Cave (www.ellorascave.com ). I also have a vampire romance, EMBRACING DARKNESS, from Harlequin, available as an e-book from Amazon and Barnes and Noble. Most of my books are offered in Kindle and Nook formats.

What books have most influenced your life?

DRACULA, because it led me to read all sorts of horror, fantasy, and soft science fiction and inspired me to start writing (as described above). Because I wanted to be a writer, I majored in English in college and graduate school. Getting into writing fantasy and SF even brought me together, as a teenager, with the boy who eventually became my husband, who was the only other aspiring writer I’d ever met at that age (and we’re still married). The other most influential books were THE SCREWTAPE LETTERS, the Narnia series, and in general all of C. S. Lewis’s works.

What is your favorite meal?

Chicken curry the way my husband makes it. Homemade spaghetti (tomato and meat sauce) is a close second. 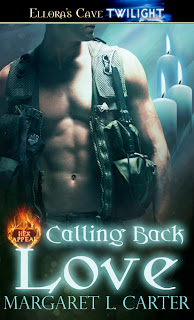 Blurb:
War has stolen Kirsten’s fiancé Shawn from her. After he’s reported missing and presumed dead in Afghanistan, she turns to witchcraft to bring him back. Though she can’t recall him from the dead, magic can grant them one last weekend together for a proper farewell. Once she has tasted his love again, she can hardly bear the thought of letting him go. Yet even this brief interlude violates the laws of nature. There is no way to make his return permanent—or maybe there is.

Excerpt:
The leather-bound notebook lay open on the redwood kitchen table, its scrawls of black ink a mockery of Kirsten’s faint hopes. “I’ve scoured every page of Grandmamma’s Book of Shadows. I can’t find one word about what I need.” She slammed the book shut. “Not a thing about restoring life to a person killed before his time.”

“And you won’t.” Estelle shook her head, the spring of her salt-and-pepper curls punctuating the decree. “No magic can call back the dead. And even if it could, you know that never ends well. You’ve read ‘The Monkey’s Paw’ and that book by Stephen King.”

“But I can’t leave it like this. When we talked on Skype the night before his last patrol, we had another fight about his career. I came this close to making him choose between the Army and me. We didn’t have a real goodbye. If there’s any way magic can give me one more chance, I’ll take it.” In the two months since the report of Shawn’s presumed death in Afghanistan, the memory of that argument had been eating her alive.

“When I promised your grandmother I’d mentor you in the Craft, I accepted certain responsibilities, one of which is to stop you from making reckless choices.”

Kirsten rubbed her eyes, sore from yet another crying fit just before she’d come here, and stared at her mentor with wild hope. “You wouldn’t talk about stopping me if it weren’t possible in the first place. Okay, witchcraft can’t bring the dead back to life. How about calling up his spirit so we can have one last conversation?”

“Have you ever seen me conduct a séance? Me or any other responsible witch? It’s against nature to disturb the peace of the dead.” Estelle strolled to the counter to pour two mugs of coffee. The window over the sink framed her silhouette against a serene background of sun-dappled trees, a mockery of the turmoil that racked Kirsten. Her teacher’s spacious kitchen with its granite floor, exposed oak beams and aromas of drying herbs usually welcomed her with its warmth. Today it felt as bleak as the rest of the world.

“I don’t believe he’s at peace. He was blown to bits on a mountainside with nothing left to bring home.” Survivors of the platoon had reported two explosions, the second of which had obliterated Shawn. No remains had been found, not even a minute fragment, hence the “missing and presumed dead” conclusion that left him in official limbo. “We were supposed to get married after he finished this tour. The IED stole that from us. I’m not at peace with that so how can he be, wherever he is?” She shoved aside the mug Estelle set in front of her.

The older woman clasped her hand across the table. “When the gift for magic skipped your mother, your grandmother entrusted your training to me. She’d find a way to rise up and haunt me if I let you risk yourself with any such dark working.”

“There you go again, hinting at something you’re hiding from me. Well, maybe I don’t need your help. There’s got to be somebody on the left-hand path who’ll teach me what I need to know.”

Estelle’s thin face hardened, as stern as an avenging angel’s, her blue eyes turning icy. “Don’t even think that. Do you imagine for one minute the Goddess would shelter you from the consequences?”

“Where was She when Shawn died on that mountain?” Kirsten stood up and paced around the room, feeling she might explode if she sat still another second. “Last night I remembered something that happened when I was really little, five or six. My pet rat died.”

Estelle froze, staring at her.

“Grandmamma happened to be visiting that day. I peeked into my bedroom and there she was, holding Snowy in the palm of her hand. She whispered some words and he started moving. Somehow I knew I wasn’t supposed to see that so I never said anything. But I know what I saw. Mom said Snowy must have just been sick but I know Grandmamma brought him back to life.”

“As you said, you were very young. You misunderstood. Your pet wasn’t actually dead.”

Kirsten folded her arms and glared at her teacher. “What happened to your core principles of truth in the Craft? I know better. He was dead and then he wasn’t. As soon as I remembered that day, I knew magic could bring Shawn back to me.”