Hi, Amber! I really appreciate you having me here today!

Anytime Tessie. I love having you here.


Tell us about your current release.

November was a very exciting month for me! I also had a novella, Sensations, release with RP on the 9th!

Getting Down To Business will come out March 14, 2012. It is an office romance, a favorite subject of mine!


When was your first sale?

Ageless Desires was contracted in October 2008 and released in March 2009.


When in the day/night do you write? How long per day?

I write anytime I’m able, but early morning is my favorite. One of my problems is that due to various circumstances, I can never count on how long I may have at any sitting.

I can’t skip around in the story. If I get stuck on something, I have to work through it in order to move on. This has caused huge delays in more than one of my projects!

What does your family think of your writing career?

Depends on who you talk to!! Don’t get me wrong, they are all 100% supportive, but a couple of them are somewhat scandalized by my subject matter!!
Amber: Ha! Ha! I have a few of them too!
Does your significant other read your stuff?

Actually, he listens to my books throughout their creation and is an essential part of my process. Of course hubby greatly enjoys adding his two-cents-worth to the love scenes! But more importantly, he is brutally honest when it comes to character’s behavior, the plot flow, pacing and overall believability within the setting I’ve created.

Let me give a recent example. The submission deadline for Getting Down to Business was looming, I was way behind schedule and stressed beyond belief. I read him chapter two (it only has three due to being another Erotic Gem), and immediately knew there was a problem when he was silent for long minutes. Being a very smart man, he first said what he liked about it then carefully and eloquently explained what he felt was wrong with it. I listened, got annoyed, wanted to cry, turned off the computer and went to bed after issuing a terse, “thank you”. I spent a near sleepless night and was totally useless the next day in my office as I pondered his comments. Hey, I didn’t say our collaborative process was easy!! He was absolutely right, though, and when I incorporated his suggestions, the rest of the story easily fell into place and I’m extremely proud of the end result!


What do you think makes a good story?

Tessie Bradford is my “stripper” name – Tessie was the first pet in my life, Bradford was the first street I lived on.
Amber: What a cool way to get your pen name. :o)
Do you listen to music while writing? If so what?

I don’t. I either work in as much silence as possible in my house, or listen to The Food Network on TV.
Amber: If I watched The Food Network, I'd get distracted
What book are you reading now?

Seduced by Blood by Taylor Tryst.


What songs are most played on your Ipod?

I love this question – I don’t have and Ipod! I listen to the radio, or slap on my ear-covering headphones that plug into my ten year old CD player!!
Amber: Had my mom not bought me one for my birthday I'd be doing the same thing as you. ;)

What is your favorite meal?

If I had just one, I wouldn’t have so many jiggly parts.


Do you have any suggestions for beginning writers?

Never give up on your dream.
Amber: Great advise.


What would we find under your bed?
Dust bunnies, dog hair, a rogue sock and my left tennis shoe.
Do you have anything specific that you want to say to your readers?
Thank You!

Thanks for being here today, Tessie! As a fan I highly recommend Tessie's books to everyone. Here's a little taste of her yumminess! 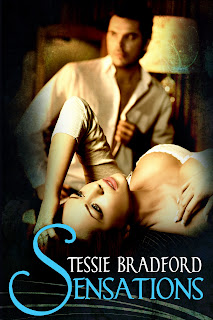 
Vivian Walcourt is completely out of her conservative, sheltered element when she finds herself at an ultra-exclusive adult club. Her free spirited best friend may think she’s in love with one of the owners, but Vivian doesn’t believe in whirlwind courtships. 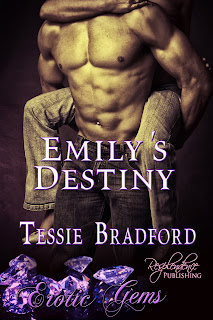 
Emily’s been keeping her two alpha male mates at arm’s length, fearing that with their traditional changeling values, they will try to curb her independent, free-spirited nature. She loves them both with all of her heart, but takes off to Europe when they press their suit. After a whole bunch of soul-searching, Emily’s home, ready to embrace life with her men.

Colby and Darrin have never doubted that Emily is their destined mate. They’ve played by her rules for a very long time in an effort to prove their love. The game is about to change.
Posted by Unknown at 5:22 AM