Today is release day for Out to Protect 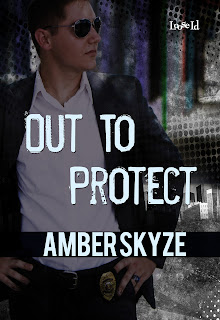 Blurb:
Someone is killing prostitutes and Grant Wesson has been assigned to find out who the killer is. Problem is he just came out to his best friend and partner. Ralph didn't take it so well, so Grant's been reassigned to the new kid on the block, Parker Townsend.

Parker is young, sexy and very much in the closet. Grant fights the growing attraction he's feeling for his new partner, until Parker changes things up. He wants to break the rules and have sex with his new partner.

Against his better judgment, Grant agrees. It's the hottest sex either of them has ever had, but it's a distraction. The killer has Grant in his sights. Parker promises to protect him, but it's his heart that needs protecting.

Excerpt:
Grant paced the conference room. He looked at his watch. “Where the hell are you, Ralph?”

He tugged on the collar of his button-down shirt. The tie he wore stifled him. Sweat beaded on his upper lip. Grant fought the urge to wipe it on his sleeve. The perspiration on his forehead increased as his heart raced.

Am I having a heart attack?

Grant covered his chest with his hand. He needed to calm down.

“For Christ’s sake, it’s only Ralph,” he said to the empty room. Who was he fooling? Ralph scared the shit out of him. Yes, they’d been partners for nearly ten years, but Ralph carried such a hatred for “their type.”

For years Grant had listened to Ralph talk about how much he loathed gays and how sick he was of them demanding equal rights. He recalled a conversation where Ralph pulled out his gun, an evil look in his deep brown eyes, and pointed it at an empty space. He’d pretended to pull the trigger and said if he weren’t a cop, he’d shoot a few of them just to scare them straight.

A chill passed through his body just thinking about that day.

“I’ve got to be a fucking fool.” He dragged his fingers through his hair, knowing the gelled look was ruined.

Grant spun around, surprised to see Ralph behind him. He hadn’t heard him enter the room. How long had he been standing there? Had he said anything that would reveal what he was about to confess? The air grew heavy; the walls seemed to draw closer. Grant felt a panic attack coming on.

He walked over to the table and took a seat.

“You don’t look so good, partner. Are you sick?”

Was he sick? Possibly.

Ralph shrugged. “The air seems to be working.”

Grant struggled to breathe. He slowly took a deep breath.

“Do you need me to call medical? You don’t look so hot. You’re white as a ghost.”

Somehow Grant felt that was an understatement. He felt physically ill. Nausea rolled in his stomach, threatening to charge up and out his mouth.

“Sure.” Ralph took a seat and tapped his hands on the table.

Grant shook his head. Ralph was always a restless person. He tapped his hands on his legs or on the dashboard if he wasn’t driving. It surprised Grant that Ralph wasn’t a beat officer. Walking the streets would give him the opportunity to get the excess energy out.

After a few deep breaths, his nerves started to subside. He had to get this off his chest and tell Ralph the truth. In the end he prayed it would be all right. They were not only partners; they were friends.

Grant slapped the table louder than he expected.

“Shit, if you wanted my attention, you could’ve cleared your throat or something,” Ralph said.

“Now you have my full attention. What’s this meeting all about?”

The time had arrived. Grant had dreaded this moment for the last ten years but knew he couldn’t keep the information from his partner another day.

“Ha-ha. What, am I being punked or something?” Ralph looked around the room as if he expected a camera crew to pop out of the corners.

He looked at Ralph, the guy who had protected him many times over the last ten years. The image of Ralph standing over him while he bled from a gunshot wound came to the forefront. Ralph had given him words of encouragement while holding the bleeding wound on Grant’s leg. Ralph had kept Grant calm through the pain, and damn it had been painful. That was the first time he’d been shot. Grant had had a few superficial wounds over the years. Par for the course when one was a police officer. Ralph, on the other hand, had always been the lucky one. He’d never experienced what it felt like to be shot.

Ralph stared at Grant. “What the fuck? Where are the cameras?”

“You’re not being punked. I’m being serious, Ralph.”

“What are you fucking talking about? Are you saying you’ve just discovered you’re gay? ’Cause if that’s what you’re trying to tell me, you’re fucking wrong. I’ve known you all these years, and you ain’t queer.”