She wants to kiss his booboo and make it better in Cerise DeLand’s  newest DO HIM RIGHT!

Kissing his booboo won’t make it all better. But restoring his credibility and helping him build a new career might just do the trick.
Shana Carpenter hustles to make Chet Stapleton king of the rodeo and end her guilt about killing his bronc busting rodeo champion career.
Cerise DeLand shows a good girl how to do that in DO HIM RIGHT, her newest, out from EC Friday March 28. EC
BUY LINK: http://www.ellorascave.com/do-him-right.html
Also available at Amazon, Barnes and Noble, iTunes and Kobo!

Blurb:
Shana Carpenter ruined rodeo champion Chet Stapleton years ago with hastily written words. Now a PR pro, she's engineered a plan to make amends. She'll successfully promote his rodeo, soothe her conscience and leave. Trouble is, she can't keep her hands off the smooth talker or call a halt to their smokin'-hot sex.
Chet takes one glance at Shana and develops an itch to put his boots under her bed...permanently. He's won awards for taming willful fillies so he can't understand why he can't break Shana's stubborn refusal to open up to him.
The closer Shana gets to Chet, the more she wants to stay in his life and his bed. But to do that, she'll have to tell him everything—and risk his rejection. One thing is certain, if Shana doesn't put the past to rest, she'll never be able to grab the future—or the cowboy she wants most.
Excerpt: Copyright Cerise DeLand 2014, All rights reserved.
Scene takes place in Chet’s rodeo office in southwest Texas on a sweltering August morning.
“Miz Carpenter? Ma’am?” Chet Stapleton raised his voice, but he definitely sounded strained, as if he were strangling.
“Hmm?” She lifted her chin and shook back her shoulder-length, platinum curls.
He swallowed, loudly. “What’ll it be? Water? Soda?” He raised a hand to buzz his assistant on the intercom. “We have coffee too, if that’s your poison.”
“No.” You are. My fixation. Ever since, I wrote that article about you in the sports section of the Dallas paper four years ago. Ever since I printed a retraction, resigned for my foolishness and began to plan how I’d make more amends. Now I’m going even nuttier, contemplating how I can take you into my bed and kiss the hurt away.
She squeezed her labia together and felt a trickle of perspiration wend its way between her breasts.
“Water. Cool water. Please.”
“Two waters, Reata,” he told his assistant as he squinted at Shana and looked for all the world like a guy who was trying to concentrate.
Shana would have laughed, but the lure of him had her wiggling forward in her chair to try to massage her pulsing cunt. Four years ago she had been frightened by her response to his languid cowboy sexuality. She’d been young, twenty-two, in her first job at a newspaper and so naïve, both professionally and sexually. Since she’d ruined Chet, she’d corrected both lacks. Now she thoroughly examined whatever she did before she opened her mouth or typed one word. To complement that, she also knew what she liked in men. Honest, forthright, funny. Still no man yet had rung her bells more than a few times. Hunky, jovial Chet Stapleton could definitely compete.
The man was drool worthy. With his bronzed skin, that sun-kissed shock of yellow-gold hair hanging over his forehead, he was the epitome of testosterone. His rock-hewn features with generous lips and a mellow bass voice melted her into a puddle of foolish desire. No past lover could compare . Sometimes when she felt really low and foolish, she put down this lack in her life to a penance for doing him wrong and declaring he was a hothead with the judges.
Once more, regret flooded her, and she reprimanded herself. She was here to use her brains to heal the wounds she’d made. She had not come here to use her body to confuse the issue. She had to stop thinking like a horny lunatic.
Stifling a moan, she bent and dug through her briefcase for her copy of the PR proposal. All thumbs, she couldn’t find the thing.
“Problems?”
His tone was husky. Dark and suggestive. She looked up to see Chet devouring her with those wide green eyes, his look hypnotic, his mouth parting. A vision of him using that mouth to tantalize her sensitive nipples made her groan.
“Chair not comfortable?” he asked, suddenly solicitous.
“Oh. No. No, no. I’m fine. Chair’s fine.” Brain’s dead, but my pussy’s on fire.
“Here’s your water,” he said, sounding relieved when his assistant walked in, handed both to him then shut the door behind her.
He sprang up to give Shana one of the bottles. “Would you like a glass? Ice?”
“No. Thanks.” Shana stuck out her hand. “Water’s good. No glass.”
But when he reached out to give it to her, her fingers touched his, and this time, the shock was electric. Riveting.
She yelped.
He clamped her hand to his rock-hard chest and rubbed her fingers. “Christ, sorry. You okay?”
“Sure.” She stared up at him, automatically reaching out to caress her own burning hand and, in the process, his ribs too. “Are you hurt?”
“Feels like nothing I’ve ever known before.” He put his other hand on top of hers and stroked her from fingertips to forearm as if she were a cat in heat.
“This has never happened to me before either.” I’ve never met a man I wanted within minutes of meeting him. I’m too cerebral, my friend Liz says. Too careful. But you I want soon.
His voice was a rasp when he drew her up. “Let me make it up to you.” 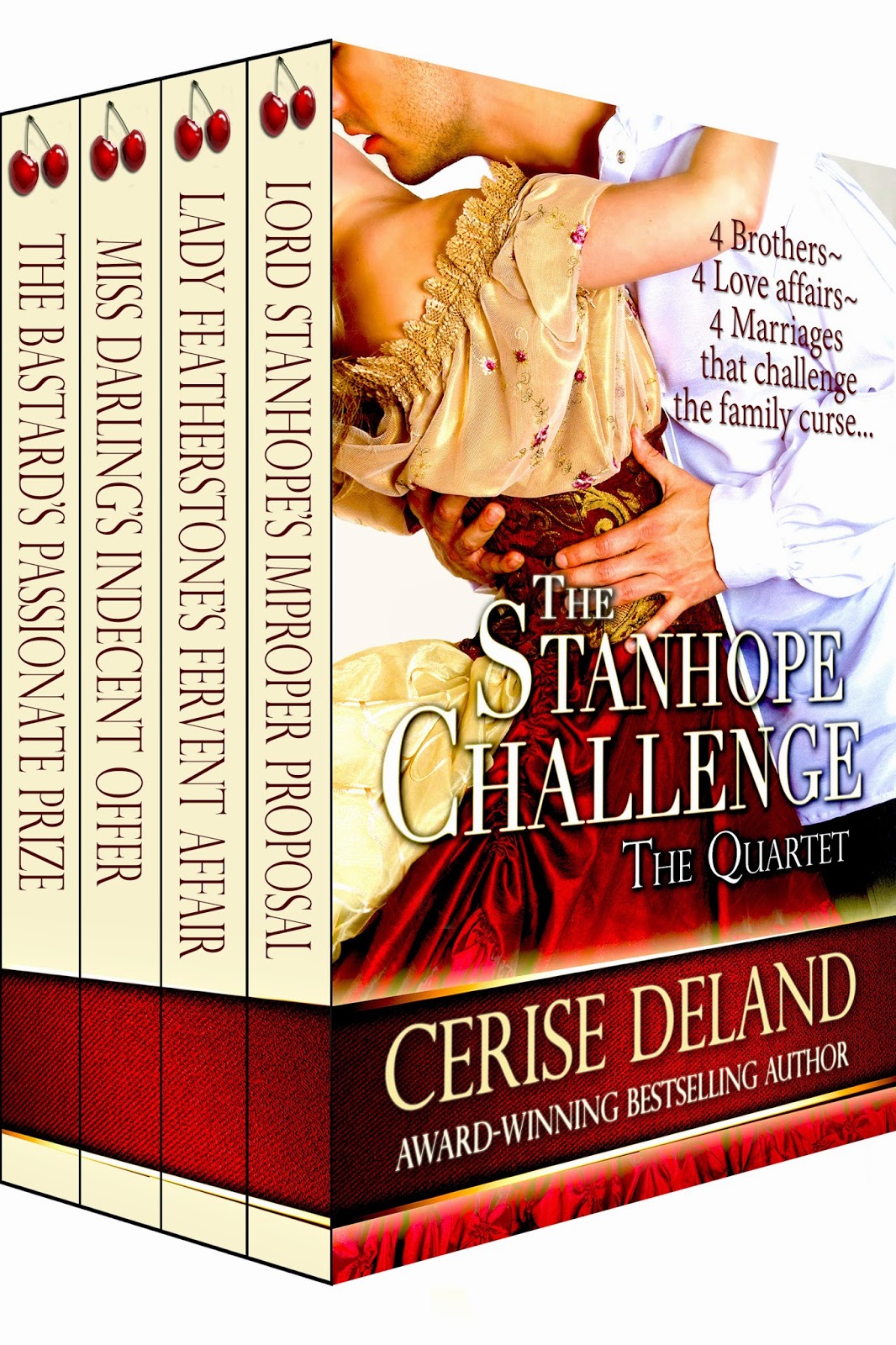 5 Regencies Release in Next 3 Weeks!

Then, hold on to your hat, because Cerise has 5 Regencies on the shelves in the next 3 weeks!
Yes, FIVE.
First, a box set of 4 spicy Regencies about a family that endures a curse upon those among them who dare to marry for love. Doomed to failure, four brothers in the Stanhope family fall for wonderful women…and fear the end of their love affairs because of a tragic curse.
Still, lured by the women they adore, the men cannot turn their loved ones away.
Four men, four brides, four marriages fight the test of The Stanhope Challenge, A Regency Quartet! 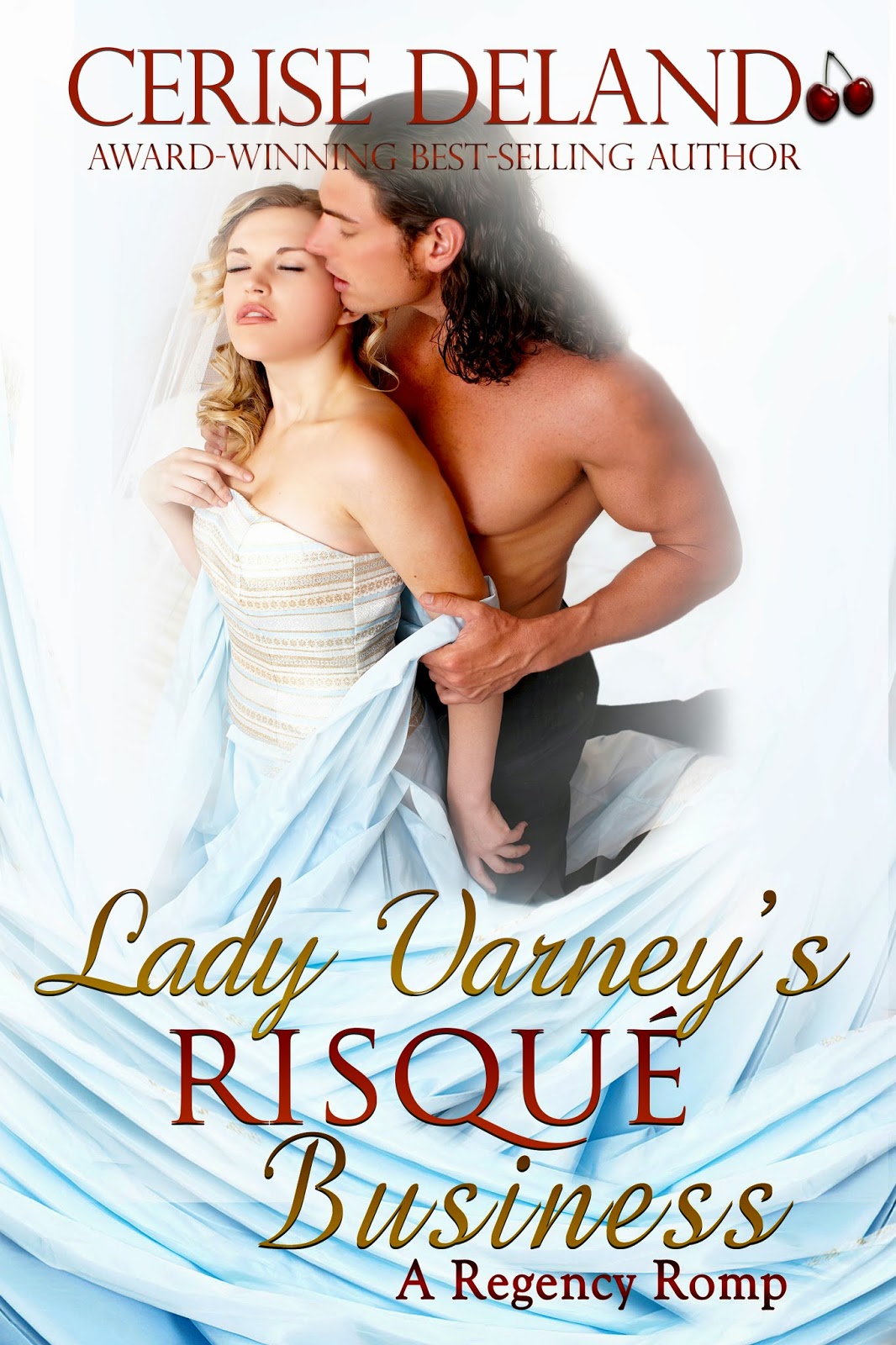 Then in her new series of Regency Romps, Cerise debuts the re-issue of Lady Varney’s Risqué Business.
Oh, yes, Lady Varney runs a very risqué business, arranging “interviews” for marriageable young toffs to meet ladies acceptable to their tastes…and their proclivities.  But when newly minted heir to an earldom Justin Belmont appears in her drawing room, wishing to hire her services for that precise reason, she balks.
How can she possibly find Justin the best bride when her heart says it should be she…and he demands she be among those he “interviews”?