Kerrianne will be hosting a Facebook giveaway celebration today!

I am so excited to share this new book with you. Full Throttle is the first in my new Contemporary Romantic Suspense series (Revved) Coming from Evernight Publishing.
I love this story so much, and I cannot wait for you all to meet Josh and Sammy. I enjoyed every moment of getting to know them—I hope you do too. xx 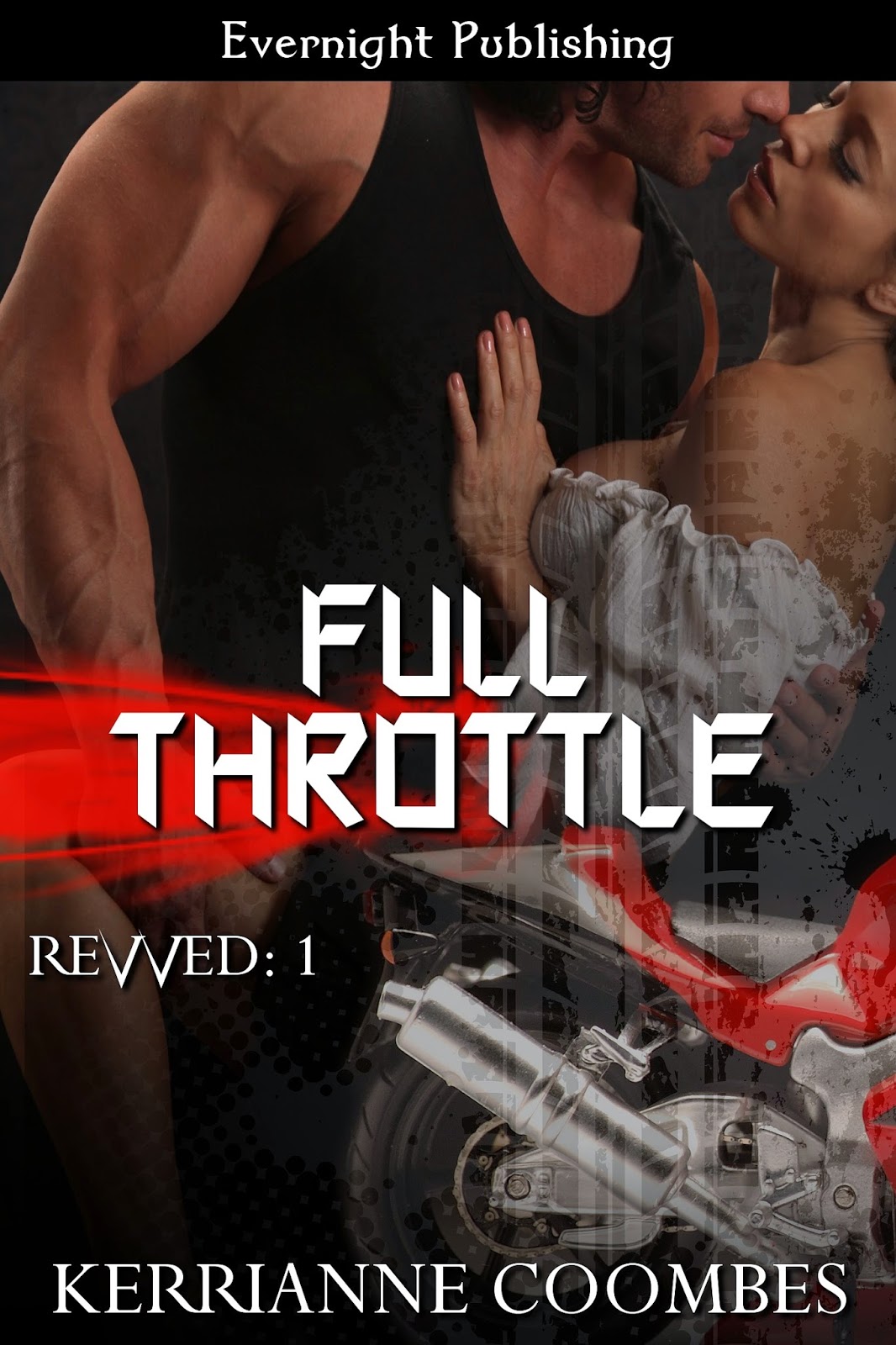 Blurb
When self professed geek and high school math teacher, Sammy Briars, decides its time to live life, she means it. Armed with determination and her life savings, Sammy buys the motorbike she has always dreamed of.
Excited by speed, fast engines and leather wearing men, Sammy finds herself in the company of people who know how to live.
Desperate to ignore the mess her father has left behind in the wake of his death, Sammy sets off looking for adventure.
When Josh Grieve agrees to take his elder brothers bike-touring group on a biking weekend, he expects to see the countryside from the perch on his favorite Suzuki and the chance to kick back from his busy schedule.
What Josh doesn’t expect is for his life to be turned inside out by a timid, intelligent woman who rocks a set of bike leathers.
Thrown together by fate, twisted together by lust. Will Josh be able to overcome his reluctance to commit before it is too late?

“Have you even slept yet?” he asked, his gaze turning darker as he studied her face.
Sammy swallowed and shook her head weakly. “No, not yet. I can’t seem to fall asleep.” She wondered how she could feel so tired, so weary, yet wide awake at the same time.
Josh swore loudly and moved to her.
Sammy watched as he climbed onto the bed, his big body making the mattress dip under his bulky weight. He threaded his arm under her neck slowly and drew her into his arms. At first Sammy was stiff and confused, but the more he stroked her hair and kissed the top of her head, the more Sammy found she relaxed. The pain receded slightly, freeing up her mind and Sammy was able to catch her breath again.
“You don’t have to do this,” she said weakly, but Josh just tightened his arm around her, making sure Sammy rested her cheek on his chest. His heartbeat was a strong sound under her ear and Sammy reveled in the heat his massive body gave off. They lay in silence for a couple of minutes, and Sammy would have thought it would be awkward, but the way he held her, gently, yet sure and strong, had Sammy sinking closer and closer to the comfort he offered.
“When I was a kid, I broke my arm.” Josh began, breaking the lazy silence. His deep voice was a lovely rumble against her ear. Sammy smiled and closed her eyes as she listened to him speak, the sound of his words a balm to her nerves, a welcome distraction to her pain. “I was climbing trees with my brother, and as usual, Tony was faster and better at it than me.”
Sammy chuckled at the image. Tony was a stocky, slightly overweight man, she couldn’t imagine him climbing a tree, let alone fast.
Josh huffed a small sound and stroked his hand idly over Sammy’s arm. Sammy loved the feeling of his hot, calloused hand as it petted her, the feeling was comforting … nice. She stayed still and kept her eyes closed, and she hoped he wouldn’t stop talking, or stroking.
“You might laugh, sweetheart, but in his day, before kids and a wife, Tony was the coolest lad in town.” Sammy smiled against his chest, her mind slowly relaxing, the pain less, and all she could concentrate on was the sound of Josh’s lovely, sexy voice. Especially when he uttered the easy word, sweetheart. No one ever used an endearment for her, and she found she liked it, a lot.
“I heard how women ruin good men.” Sammy said teasingly, even as she yawned against his chest.
“They certainly do.” Josh replied.
Sammy heard the catch in Josh’s voice, and she suddenly remembered what she’d been told about him being jilted last year. The reminder sent a strange tense feeling through her body, leaving a cold pain in her lungs. But Sammy, selfishly, didn’t want to ruin the only time she had ever been comforted in such a nice way, so she changed the subject back to safer grounds.
“So, how did you break it?” Sammy asked sleepily, eager for him to continue talking. She snuggled a little closer to Josh’s heat and sighed, contented.
Josh cleared his throat, but continued his gentle stroking of her arm. He kissed the top of her head again and Sammy felt tiredness swarm her mind. She yawned and sighed deeply, sleepiness making her heavy and relaxed.
“Go to sleep, Sammy, and I’ll tell you when you wake up.”

Find me and my other books...