AMBER:  *sitting straight with legs crossed at the ankles*  Good afternoon, ladies and gentlemen.  Today’s guest is a very interesting individual.  Madison Wescott comes from a small town in Alabama and is the heroine of Pandora’s Box.  *turns to Madison* I’m glad you could join us, Madison.
MADISON:  *resisting the urge to blink in the glare of bright lights* Thanks for having me, Amber. It’s a pleasure and an honor to be here.

AMBER:  I understand you *finger quote* helped *end finger quote* my assistant with a delicate situation?
MADISON:  Yes.
AMBER:  He sings your praises nonstop.  Could you tell the good American folks, what it was you did to help him.
MADISON:  Well…*squints at the camera* He had a Plague Demon toying with him and his family.

AMBER:  Mmmhmm…I admit I’m skeptical about the paranormal world, Madison.  But since receiving your aid, my assistant has begun to research for what he says is the coming Armageddon.  I figured anyone that inspired that type of radical reaction from such a laid-back man, should take the spotlight here and explain to us what is going on.
MADISON:  I once felt the same way as you, Amber, skeptical and disbelieving of God and monsters.  Unfortunately, I learned how incorrect I was.

AMBER:  How did you discover this alternate world?
MADISON:  My son, Amos, went homicidal at the age of five. He started by killing the family pets before moving on to the neighborhood animals. Amos even came after me a couple of times, tried to kill me with a knife.  I needed answers and help.  Oh, I got answers, but the resolution will be a little slower coming.  That monster you had in your closet as a child—
AMBER: How do you know about that?
MADISON:  Amos is a psychic.  He wanted to validate our genuineness so you would believe.  That monster in your closet was very real, it has a name…but that’s not important.  Your Momma never scared it away with her lullabies and hymns.  You pretended it did to make your Momma feel better, but it didn’t stop tormenting you until you moved from the home.

AMBER:  *glances about nervously* Where is your son today?
MADISON:  With a friend.

AMBER:  *relaxes* Where do you dream of traveling to and why?
MADISON:  Hell.
AMBER:  *blinks* Did I hear you right? Did you say Hell?
MADISON:  *nods* The why is so I can kill the demon at the root of all our problems.

AMBER:  Has someone been instrumental in inspiring your career?
MADISON:  I guess you could say Amos inspired my career.  The only options we had were to face our problems head-on or death. Without Nix’s support, I would’ve never survived the lonely life on the road chasing demons.
AMBER:  How do you educate your son traveling as much as you do?
MADISON:  He’s home-schooled.

AMBER:  *sips on a glass of water and clears her throat* Has someone helped or mentored you in your career?
MADISON:  Yes.  Zen.  He’s taught me many things.  He’s immortal, comes from a time unknown to modern man, and not someone you want as an enemy.
AMBER:  Is he the one with you today?
MADISON:  Yes.
AMBER:  He’s kind of cute.  Enigmatic and unsettling too, but I can’t explain why.
MADISON:  He has that effect on people.

AMBER:  Do your demon hunts require research?
MADISON:  *laughs* Textbooks on demon hunting aren’t exactly on the bestseller list.  Research is called life experience.  Nothing is as golden as experience.

AMBER:  What does your family think of your…ah…unique career?
MADISON:  Other than my son, the rest of my family is dead...or complicated.
AMBER:  I’m sorry to hear that.
MADISON:  *shrugs*  They weren’t good parents.

AMBER:  What was the scariest moment of your life?
MADISON:  When my son started acting out.  It didn’t help that the doctors had no clue what was wrong with him, but when we discovered a demon was to blame…*shakes head* Words cannot describe the terror and helplessness I felt.
AMBER:  Being a mother, I can sympathize.

AMBER:  What artists are most played on your Ipod?
MADISON:  Anything heavy metal. Those lyrics touch a chord deep inside me. Other things you’ll find on my Ipod are various Gregorian exorcisms.
AMBER:  What’s a Gregorian exorcism?
MADISON:  Kind of like the words to a Catholic exorcism, but much more effective at exorcising a demon from a human host.
AMBER:  Surely, you realize all this sounds like something straight out of a horror movie, right? A little hard to believe?
MADISON: *shrugs* No one really believes in the supernatural until it’s thrust into their face.  My one wish would be that no one ever learns the truth of demons.  But the reality is, anyone could be possessed with a demon.  Your spouse, your lover, your best friend…anyone.

AMBER:  *glances at her producer and makeup crew *
AMBER:  *whispers to self* That’s not scary at all.
MADISON:  Scary, yes, but I’ve not even scratched the surface of how much scarier it all can get.
AMBER:  Ahem…What do you do to unwind and relax?
MADISON:  Kill demons.
*tense silence*

AMBER:  Do you have any suggestions for new…ah…what do you call them? Demon killers? *nervous laugh*
MADISON:  Doesn’t matter what they’re called because they’ll be called “dead” soon.  My best suggestion, pick a new career.

AMBER:  What would we find under your pillow?
MADISON:  I wish I could say sheets and a bed, but I keep a blade there for whenever a demon gets brave enough to come after us.
AMBER:  I wouldn’t want to startle you awake.
MADISON:  I would caution against it.

AMBER:  Well, that’s all the time we have.  I hope you enjoyed this segment.  Madison, do you have anything specific you want to say to anyone watching today? A warning or piece of advice, maybe?
MADISON:  There are scarier things than the boogeyman.  To the demons…Hell hath no fury like a mother protecting her child.  *smiles at Amber*  Thanks so much for having me with you.  If you or anyone ever needs my assistance, please contact me through my Facebook or Twitter I.D., MamaHellhound.

Find out more about Madison, Phoenix and Amos, and everything that really happened in Pandora’s Box, Book One of the Road to Hell series.  Pandora’s Box will be released soon, a definite must read!  Until then, here’s where you can find author Gracen Miller, and all her other projects: 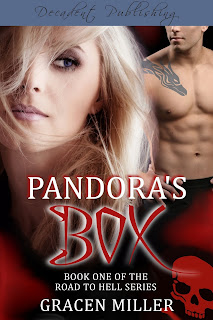 Where does the road to Hell begin?

What happens when your son turns homicidal overnight, killing the family cat before gutting the family dog? Do you cower in fear or fight for your life? Madison Wescott fights against the odds. Distrustful of a God she doesn't believe in, she finds herself face-to-face with a demonic world she didn't know existed and discovers her own soul is darkened with demonic connections.

Madison had it all…or thought she did. A husband she adored and a son that brought joy to her life. Then one morning her husband kissed her goodbye, headed off to work and disappeared. Life turned upside down, Madison grows desperate and despondent to help her bloodthirsty son after numerous attempts have failed. Only one man dares to challenge the supernatural forces manipulating them.

Or by demonic design?

Phoenix Birmingham breaches her life in a whirlwind of sarcasm and sexual appeal. A hero for the masses—and for her jaded heart—but few will ever know the sacrifices he has made or the sacrifices to come. Discovering her entire life has been influenced by multifaceted paranormal beings, Madison is determined to defeat the apocalyptic blueprint fate has decreed. Even with Phoenix's aid, can destiny be denied? Or will demonic design prevail and they pay the crucial price with their souls?

In a small, sleepy Alabama town the battle for mankind’s liberty has begun…


She nodded and watched as he doused gauze with antiseptic. "Dr. Nix at your service," he said with a grin, two adorable dimples charming her where words failed.


Madison rolled her eyes, and tipped her head to the side to give him better access. He brushed her hair off her neck, back behind her shoulder. Such a simple gesture, yet it felt terribly personal. The air grew thick and sticky with her awareness of him, which made her uncomfortable enough to shift in her seat and cross her legs.


Madison stared into his eyes. Green, she thought, his eyes were green, gorgeous and intense, with ridiculously long eyelashes women would fantasize about. If they didn't, they should. A flicker of compassion, concern, and something else she couldn't identify flashed in his eyes.


The husky tenor of his voice forced her gaze to shift to his mouth. Nice, sexy lips, designed for kissing. She gave a mental shake, but couldn't resist wondering how his mouth would feel on hers.


"Madison?" Humor deepened his voice, a touch of a smile tilted the edges of the lips she'd been fantasizing about, and she realized she still stared at them. "You ready?" he asked again, and her eyes widened in embarrassment over her foolish stupor.


She swallowed hard. "Yeah," she whispered past the lump in her throat and forced her vision to lock on the wall over his shoulder. Good God, what was wrong with her? Her pulse throbbed like crazy, and she felt woozy.


Loss of blood! Must be why she reacted that way. No other explanation made sense.


Even though the antiseptic stung like hell, the gentle touch coming from such a gruff man surprised her.


Well, she could nix the blood loss theory. Exhaustion and stress were the only other excuses she could come up with.

Leave me a comment and I'll pick a few folks to win some Pandora's Box swag!
Posted by Unknown at 4:15 AM