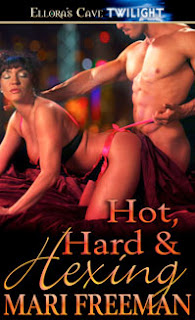 When magic is attracted to magic, it’s impossible to ignore…

Sonja Ambercroft’s homebody existence is about to change. Drastically. A Dreamstalker has kidnapped her cousin in exchange for a powerful talisman, and Sonja soon finds herself doing things she’d never imagined. Stealing the talisman from her sister? Check. Grappling with Gremlins? Check. Enjoying ridiculously hot visions about a scruffy, sexy mountain man doing untold things to her naked body? Che—

Sonja’s dangerous adventure will require help from her reclusive mountain man, a Fairy and no less than two queens—one Voodoo, one drag. But ultimately she’ll have to trust her other self, let her inner Dragon roar, if she hopes to bring her cousin back alive.

An Excerpt From: HOT, HARD & HEXING

Sonja could hear the grumbling and grunting of Gremlins echoing off the walls and the distant drip of water. She looked around for anything that might give her a clue as to where she was or something to indicate how she could get to the Gremlin’s cave.

The cave walls abruptly began to fade to blue. Her body started floating. She tried to hone back in on the vision, the cave. She needed more information but it was spinning out of her control…

She found herself back in the clearing, naked and smooth-skinned under the warm sun. Ray was already positioned between her spread legs. His intense eyes still roamed her body. With no build up to the switch, she was immediately racked with wanting and aching for his attention. She knew it was a fantasy, knew she wasn’t in control of the vision, but she couldn’t stop it. Maybe she didn’t want to.

This wasn’t what she needed to be doing. But what exactly was she supposed to be doing? Everything seemed so dreamy. Ray’s head dipped and he pressed his lips to that sensitive spot where her inner thigh met her ass cheek. The warmth of his lips sent waves of pleasure through her body. His beard brushed her skin, his tongue darted out and traced ever so lightly over her folds as he moved up, teasing her beyond her ability to remain still. She reached out to grasp all that hair, willing him to plunge his tongue deep into her pussy.

Then she felt herself floating again, away from the body in her vision.

No! Sonja struggled to hold on to the imagery, to the warmth of his touch. Her body screamed for it. She reached for him—

Why was he shaking her? He should be licking her. “No. Don’t stop, Ray. Please!”

“Come on, sweetness. Wake up,” he said with a good, hard shake.

He grabbed her hand and Sonja realized she was trying to grab his package.

She jerked out of his grasp and crab walked on her heels and hands away from him, her body still pulsing with need. But mortification quickly replaced the rush of sexual arousal and then worry took over.

Ray smirked and looked away. “I hadn’t noticed,” he said dryly. By the bulge in his jeans, she knew better. His attempt at humor wasn’t helping her embarrassment.

She suddenly realized the cave wasn’t the one from her vision. It was dry and smelled of the forest, not stinking Gremlins. “Are there other caves around here? Wet caves?”

“You thinking of tracking Gremlins?” He cocked up one eyebrow. “No way.”

“Just tell me, okay?” She was attracted to him. She had to admit that to herself. His eyes were so expressive. But why was she fantasizing about him? How could that be? In the first vision, she had never even met him before. If that was a premonition, she wasn’t sure she wanted to know that much about her future. And she had no time to deal with any of this.

“What’s your name?” His features had softened a bit. His shoulders had dropped.

“Ah.” He nodded and walked over to her, retrieving his shotgun in the process. “Ambercroft?”

He let out a big sigh. “Chasing around after Gremlins is like trying to herd a pack of crazed hyenas.” His expression saddened. “That box looked like real gold. I suspect it’s worth quite a bit, but is it worth your life? You owe money to someone? Steal that thing?”

Sonja bit her lip. No, it wasn’t worth her life—but it was worth Kara’s. “It’s not my life that’s at stake.” She chose not to answer the rest of his questions.

He crossed his arms and didn’t say a word.

She looked up at him. “I can’t tell you anything else. Besides, this is your freaking fault. If you hadn’t hung it out as Gremlin bait, I’d still have it.”

“Fine.” He turned toward the cave entrance. Over his shoulder he said, “You’ll have to find those buggers on your own. I suspect you have no weapons and no experience with Gremlins, either,” and started walking.

“Crap.” He was right. She needed him. She bit at a ragged thumbnail in frustration. How had she managed to get herself into this situation? By trying to be a hero, that’s how.

Bare minimum. Sonja would have to involve him but she could make sure it was the barest minimum possible. “I’ll buy that shotgun.”

He turned back to her. The sun was coming up and he was backlit in the mouth of the cave. It showed off his physique. The man was broad but lean. “Sorry. One of my favorites. You can rent me if that helps.”

And he was frustrating.

“Do you have other weapons you’re not so sentimental over?” She crossed her arms.

“Not really.” He looked over the stock of the shotgun. “I like all my toys.”

“Okay. I hire you to help me retrieve that box. You don’t ask any questions. I leave as soon as we find it. Deal?” All she needed him for was to get the damn box. Then she’d be on her way to Asheville and could forget all this ever happened.

“Tell me why you asked about the wet cave and what’s happening when you pass out like that.” He took a few steps closer. His brows were drawn. “It looks like you’re sleeping and dreaming really hard. You psychic?”

Sonja put her hands on her hips. “Didn’t I just say no questions?”

“I need to know ’cause you could get us both killed if you zone out like that when we’re in the middle of a Gremlin nest. I’m not getting chewed up by Gremlins for anybody.”

“Fine. My Demon power is visions. But I’m a Halfling.”

“So you can’t control them at all? They just sneak up on you and take you out of commission like that?”

“Not exactly.” Not before I called the power from that box, they didn’t. Who knew now? She decided to leave it there. “But close enough. How much?” Time was passing. She only had ’til the afternoon to get the box back and get it two hours away to Asheville.

Was he not paying attention? “To hire you to slay the Gremlins?”

“On me? Maybe fifty bucks.”

“Sold.” He held his hand out for payment.

It looked just like it had on her thigh in her visions. Why did she see herself without scars and see Ray just exactly as he is now? Well, he had a different shirt, but his skin and hair and those dang gorgeous eyes were all the same. She dug through her bag and gave him the money. “That’s pretty cheap…considering.”

“Like you said, I hung it in the cave to be gotten.” He shoved the bills in his pocket. “Now tell me what you saw in your vision.”

She blushed at the thought of his eyes looking up at her from between her thighs, but ignored it. She needed to concentrate on the task at hand. Kara. Gremlins. Asheville. She tried to recall everything about the vision—the cave portion of the vision. “Um…the cave was somewhat narrow and I felt like I was down pretty deep. I don’t know why. Maybe the temperature? It was cool.” She put her hand on the stone beside her. “The walls were slick and damp. I was standing in water—shallow water—and my feet were muddy.”

He nodded. “That’s easy enough. I can only think of one place in the area that’s deep enough for Gremlins and has water.” He looked her up and down then strutted to his truck, Sonja on his heels. He pulled his hunting vest from behind the seat. “But you’re not going to like it. Maybe you should stay here.”

She yanked the door open and plopped down in the truck. “Yeah. Right.”
Posted by Unknown at 4:53 AM