It's Friday! I'm excited because I don't have to work this weekend. On top of that the DH wants to make it a weekend celebration for my birthday (which is really Monday). Thing is he knows I tend to shy away from being in the spotlight. I don't like being center of attention or making a big deal out of my birthday. He is just the opposite. In fact he celebrates his birthday week and we even take one of our vacations that week. Even at 41 he's like a big kid, but that's what I love about him.

Today I want to get back to writing after having been sidetracked the last few days with, well....LIFE. lol
For those of you waiting I'm going to try to get my newsletter out today.

In other news, my friend Penny Watson has a new release today. Here's all the information you need to grab a copy! 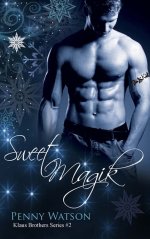 Available at The Wild Rose Press


Oskar Klaus' job is killing him. Not even his favorite hobbies (extreme snowboarding and browsing old bookstores) are enough to snap him out of his funk. It's not easy living in the shadow of four successful older brothers and a father named Santa. Little does he know that a kiss on New Year's Eve is about to turn his life upside-down.

Kiana Grant's Manhattan life is a world away from her childhood in Oahu. She traded sunsets and surfing for a respectable career in library science, but Oskar Klaus is a temptation that's hard to resist. Before she knows it, she's in the midst of an outrageous adventure in the North Pole, dealing with mischievous elves, wicked demons, and a devastating attraction to Santa's youngest son.

There's just one problem...a bitter elf hell-bent on revenge threatens the future of everyone in the North Pole, even Santa himself...

He never heard the end of the countdown. One minute he was leaning toward her, and the next he was lost in a tropical Eden. Sweet and lush, surrounded by warm breezes and the feel of sand beneath his bare feet. The scent of perfumed flowers filled the air, and he groaned as Kiana’s slender arms wound around his neck.

She let out a breathy sigh just before her lips touched his. So softly, so gently, he wasn’t sure if it was real. He brushed his mouth over hers and she opened for him, tasting of tea and honey and paradise.

Greedy for more, his hands slid under her baggy blouse, stroking the smooth skin of her back. He pressed her closer until he felt the pounding beat of her heart against his chest. Her fingers fluttered like a butterfly against the stubble on his cheek, finally resting there and tracing his jaw.

He deepened the kiss, pushing her back against the cushions of the sofa, devouring her mouth. Her leg hooked over his knee pushing the drab gray skirt up her thigh. A long expanse of soft skin rubbed against his trousers.

Without thinking, he moved a hand to her leg and dragged his palm along the bare skin. He could swear he heard the sound of the ocean, waves crashing and returning to sea. He moaned and Kiana gasped in delight. He was having difficulty breathing, so he pulled back, nipping her lip on the way.

The heat of a scorching sun bathed his body, and before his eyes finally snapped open, he heard the faint sound of a ukulele playing. Then, silence.

His eyes opened and he found himself sitting in the darkened corner of the living room, alone on the sofa. In his hands he held a pair of tortoiseshell glasses.

Kiana was gone.
Posted by Unknown at 7:16 AM