It will be available from the Naughty Nights Press EStore and all good ebook sites. 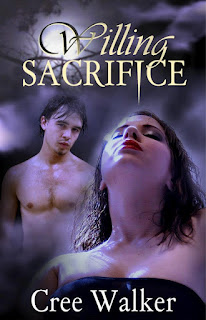 
Sugar Coon is the widowed wife of Jack Coon, her werewolf pack’s former Alpha. After having died because of a long forced separation caused by the Elder’s Council he hasn’t giving up their ‘forever and ever’ just yet. Werewolves mate for life and normally when a mate dies the other is soon to follow, but Sugar is different from the rest. She is a natural Born Werewolf just like Jack, however, for unknown reasons she doesn’t die within a year of Jack’s death. Sometimes she wishes she had.


The haunting from her dead husband starts out as gentle whispers and soft caresses on her skin, but soon as he grows stronger his real intentions are not easy to mistake. He wants what every werewolf wants – a forever mate – and if Sugar won’t die naturally, Jack is willing to take whatever steps necessary to bring them together again.


The Elder Coon, Jack’s Grandmother, summons Sugar in an effort to overthrow its newest Alpha, Robert. For Sugar, meeting Robert isn’t exactly love at first sight, but she does feel drawn to him. A part of her thinks it’s just her bad taste in men.


Sugar is confused as to her role the Elder’s plan to overthrow this new Alpha. She’s wondering if it’s even such a good idea. The Elder Coon was fond of using Jack’s pack as a bargaining tool to control him, forcing him to become her own personal weapon of mass destruction when things weren’t going her way politically.


Trial and error unravels the web of lies and deceit the Elders have woven in order to control her, and attempt to control Robert to further their future conquests. Having decided they both want the same thing they find themselves on the same side when it comes to taking out the main source of the werewolves problems, the Elders. They also find themselves falling in love, something that terrifies Sugar since losing her last mate.


Sugar discovers she has a bargaining chip to play with when she speaks to a witch about a little poltergeist problem. Jack isn’t a ghost – or he’s not just a ghost – he’s a Hellhound. It seems that’s where all the bad werewolves go when they die. Hellhounds become servants to the Reapers who handle them in the afterlife, using them as retrievers for the hard to handle spirits headed south. This particular Reaper is willing to help Sugar take out the Elders if she’ll help him trap Jack, but there is an additional cost to the deal.


Sugar is pregnant with twin girls from separate fathers. One is Robert’s and the other is Jack’s, it seems Jack had one final wish as well.


The freedom of the werewolves has cost Sugar greatly and though she’s made several willing sacrifices in the name of leadership and love, she’s made one she is not willing to forgive herself for. The Reaper has made a request that Sugar love and care for both of her daughters equally, but one day he will return and chose one of them as a final cost for his part in their deal.