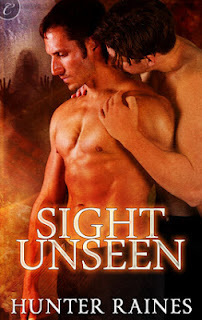 Daniel Van Doren was once a renowned writer, until he was blinded in the car accident that killed his lover. Now, all he sees are ghosts in need of help. They follow him everywhere, and the only way to be rid of his ethereal visitors is to help them resolve their unfinished business here on earth so their spirits can find peace.

Ghostwriter Logan Riley is assigned to pen Daniel's biography. He plans to reveal him as a fraud, but when they meet he's struck by Danny's quiet sincerity--and a growing attraction. Which makes sticking close to Danny to find out the truth more than a little distracting.

When they are attacked by a violent poltergeist, Logan begins to believe Danny's not just telling the truth, he's in grave danger. A spirit has learned how to harness the energy of the living to break through the barrier between worlds to harm Danny. And Logan may be the one to blame...

Danny loitered by the door, listening for the sound of a car pulling up the drive. His heart thumped, each beat measuring the passing of time. He’d been standing there for at least ten minutes, though he hadn’t bothered to check his watch. Maybe Logan wouldn’t show up. Maybe after having a night to think about it, he decided Danny had been right—he wasn’t in the least bit interesting, and spending the next few months following a blind man around would be preferable only to watching paint dry. Maybe—
But no. There it was, the sound of a motor revving, then slowing as it pulled into his driveway. It sounded different than the police cruisers Nick normally sent for him. Different also than Nick’s beat up truck, which sputtered and coughed like a tractor.
Danny waited until Logan rang the bell, then lingered a little while longer after that before unlatching the bolt. Throwing the front door open the moment the chime pealed would only make him look desperate.
And he wasn’t desperate. Lonely, maybe. Eager for another whiff of that mouthwatering cologne, definitely. But not desperate.
“Ready?”
A swift shot of longing chased away the uncertainty Danny had been feeling all morning. He grabbed his cane and stepped outside, letting the door close behind him.
The female ghost from the Java Café was back, too, and she didn’t look anywhere near as calm this morning as she had last night. In fact, she seemed downright restless, pacing across the field of darkness, scowling at the geriatric boxer when he got in her way and flicking dart-filled glares at Danny. The ball of light she held had shrunk to the size of a marble. Was that why she was so upset?
Unable to help her even if he wanted to, Danny turned away and faced more or less in the direction he thought Logan would be standing. “I wasn’t sure you’d show.”
“Did I give you a reason to doubt me?”
Danny shrugged. He trailed his fingertips across the lock, then fumbled with the key, unable to slide it home as quickly as he’d have liked.
Logan’s fingers wrapped around his, sending a shiver down his spine. “Here, let me help.”
He opened his mouth to protest, then closed it again when he realized Logan had no intention of taking his keys. Instead, he guided Danny’s fingers, positioning the key before pressing their hands forward. Logan’s back pressed against Danny’s, pinning him to the doorframe. The unmistakable feel of Logan’s erection against the curve of his hip made it hard to breathe.
The key slipped inside, and Danny nearly moaned. Logan turned their fingers until the lock clicked into place, then he drew back, leaving Danny shaken and disoriented.
“Take my arm. I’ll guide you to the car.”
Posted by Unknown at 4:00 AM