The Dragons Have Landed 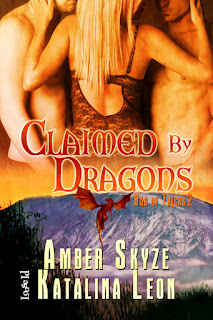 In an odd Wiccan shop in Salem, Jael pulls an unusual stone from a witch’s wish bag. Little does she know her wildest dreams of adventure and a torrid affair with two gorgeous co-workers are about to come true—in spades.

Jael’s dreamy boss, Roarke offers her the assignment of a lifetime: a photo safari to Mount Kilimanjaro. The African scenery is stunning but the unexpected arrival of her two office crushes, Roarke and Kypton ignites her passion. Just as the trio is getting steamy at a beautiful waterfall, danger intervenes forcing the men to reveal their secret. They're dragons. And now, to save her life, they have no choice but to abduct a startled Jael to their mountain lair on Kilimanjaro.

Jael drew an anxious breath as she reached into the black felt bag. Choosing a stone from the wish bag started off as a trivial, touristy thing to do in a Salem witch’s shop, but now it felt heavy with importance, as if the choice truly mattered.

The atmosphere of the funky little Wiccan store, Silver Moon Scrying Shoppe, was charged with a strange excitement. She thrust her hand deeper into the bag and allowed a variety of smooth stones to tumble between her fingers.

“Let your fingers do the work.” Witch Casey leaned closer to better see Jael’s actions. “Don’t think about it. Let your heart guide the choice.”

Jael closed her eyes to block out the sounds around her and the overt, curious stares of her girlfriends Arcona, Becca, and Devon, who hovered near, watching her every move.

She concentrated on the stones. Casey, a renowned witch of Salem, Massachusetts, had told them they’d know when they found their stone, but Jael had yet to feel that telling inner ping of certainty as she stirred the stones with her fingertips.

A skeptic at heart, Jael wasn’t sure she’d believed in the hokeypokey magic of the town prior to coming. It’d been her friends’ idea. This minireunion of her three closest college friends had been a big wake-up call. Time was passing. They were all in their thirties now. Seeing them was a sharp reminder of the many dreams she once cherished but had allowed to languish.

In her college days she’d fully believed she’d be a globe-hopping, peer-respected nature photographer by now, but too many mundane obligations, like paying rent and eating, had prevented that dream from materializing.

Her friends thought visiting the town of the famous witch trials and infamous hangings would be a fun autumn trip. It was a weird choice, but they’d been right. There were so many amazing shops where curious souls could get a tarot-card reading or have their palms read. She was desperate to hear a little hint about what her future love life might hold. There wasn’t much going on in that department now.

They went on ghost tours, to a museum, and the walking tour was incredible. Jael loved anything historic, so strolling the streets and seeing homes that dated back hundreds of years intrigued her.

The most poignant part, and without doubt the saddest, was the monuments for the men and women who were accused of witchcraft and hanged. The nineteen bench-like stones bore the names of those who’d suffered a horrible death. The cemetery next door added a certain creepiness to the scenery. Jael felt sorry for those who’d lost their lives. She couldn’t imagine what it felt like to be dragged out of jail, brought to a tree, and hanged for the town to witness and cheer.

Jael continued to absently stir the cool, clattering stones between her fingers.

“Choose?” Devon laughed. “Jael doesn’t commit. You know how she is. She’ll drag this out all day and still not make a clear choice.”

“That’s not true.” Jael jolted back to reality, realizing she’d completely forgotten what she was doing and why. “Don’t rush me,” she whispered. “This is important. I want to choose the right one.”

“You’re going to chose just one?” Arcona scoffed with a gentle smile on her lips. “That doesn’t sound like you.”

“Why are you all ganging up on me?” Jael laughed. “There’s nothing wrong with being choosy and having a plan B and a plan C…especially where love is concerned.” She refocused her attention on the wish bag. Blindly touching the polished stones and listening to soft clicking sounds they made was almost hypnotic.

“Aha!” Arcona interrupted. “Now we know you’re going to use your wish on love. What a shocker.”

“Hey, I need it!” Jael dug her hand deeper into the wish bag. “My love life has been bleak.” One stone finally stood out from the others. She felt heat cover her fingertips as if she were being drawn to a single piece of hot lava. She wrapped her fingers around the stone and pulled it from the bag with a victorious flourish. “I found it!”

She gazed at the rock lying in her palm. It looked like two stones fused together. The egg-shaped stone was opaque on one side and a translucent purplish on the other. The purple reminded her of an amethyst, while the other was a mottled dusty shade of rose.

“Oh, Jael, that is an odd-looking stone.” Arcona reached for Jael’s hand to tip the sparkling stone toward the light. “It’s beautiful when things you’d never think would fuse together mix.” She stared at the stone in wonder. “The world is full of weird stuff, isn’t it?”

Jael looked from the two-sided stone to her friend. “It is different.” She glanced at Witch Casey to see if she had any advice as to why she’d chosen such a stone.

“Interesting, but not surprising.” Witch Casey shook her head with her lips firmly pinched together.

“Undecided?” Jael stiffened and crossed her arms in a defensive manner. She’d been often accused of being indecisive in the past, and it hurt. Obviously Witch Casey had been eavesdropping. “Are you referring to me?”

“Of course I’m referring to you.” Witch Casey planted her fist firmly on her hip as she confronted Jael. “You’re the one holding the dual stone, not me.”

“What do you mean by undecided?” Jael knew where this was going. Witch Casey would now deliver a trite and highly predictable forecast about her future love life. She braced for the safe little clichés she knew were headed her way.

Witch Casey arced her hands dramatically through the air. “Your heart is always in two places at once and refuses to choose a lasting home. Am I right?”

Jael slightly recoiled. Witch Casey was right. The way the woman spoke with utter authority sent a shiver up her spine.

All her life she’d rushed toward one goal when secretly desiring another. She longed for a stable relationship, even a family, but another rogue part of her soul wanted to ditch her responsibilities, pick up a camera, and flee to the exotic wilds of Africa to fulfill her creative dreams. The same went for men. She could never make up her mind. Variety was the spice of life.

“There might be some truth in what you’re saying,” Jael sheepishly answered Witch Casey.

Arcona leaned close to Jael’s ear. “I remember our last semester. You were always dating at least two guys at once and trying to keep it a secret. It never stayed secret.”

Jael silently admitted her love life was a disaster of indecision. She’d never met a man who fulfilled all her needs. Okay, maybe one man—Roarke, the gorgeous guy at her office, was a thrilling date for a friends-with-benefits type of evening, but a more solid relationship never quite gelled. Deep down she knew why.

They were two of a kind. Roarke was almost as undecided and commitment shy as she was. He would pant after her with lustful looks, coax and almost beg her to visit his apartment. When she gave in, the sex was always hot. Roarke was a total turn-on. Her hopes would rise that maybe Roarke was the one, and then nothing would happen for weeks at a time. No pursuit, no invitations back to his bed. It was as if Roarke would deny himself her company until he couldn’t stand it a moment longer; then he would call.

She’d noticed Roarke’s nightstand was fully stocked with condoms and every exotic brand of lube on the market, so she had to suspect he enjoyed other lovers as well, which hurt. She wanted to be someone special to him, and apparently she wasn’t. Obviously there was another.

“Would you like me to do a card reading for you?” Witch Casey interrupted the silence. “It might clarify a few of those undecided thoughts.”

“I don’t know…” Jael’s gaze darted anxiously between her friends. Their visit was nearly at an end. She wondered if her friends would willingly wait while Witch Casey sorted through the confusing details of her elusive love life. Probably not.

“You should do it.” Arcona shot Jael an encouraging smile. “Accept the card reading. Isn’t that why we walked in here in the first place—to get a little insight?”

Jael was suddenly nervous and excited to hear what Witch Casey had to say. “Are you sure you don’t mind? It really cuts into our last hour together.”

“I want you to do it.” Arcona wrapped her arms around Jael and hugged her like a loving sister. “And I expect to hear all about it later,” she said softly. “Don’t hold anything back. Actually I’m thinking of calling it a day. I have an early flight home, so I think I’ll say good-bye to everyone now.”

Arcona gently released Jael and hugged Devon and Becca as well. “It was so good to be with all of you again. You still feel like sisters.” She headed toward the front door. “I need some fresh air. I’m going to walk back to my hotel. It was so good seeing everyone. I love you all!” She waved. “I’ll be calling everybody later to hear about exactly what happened after I left.”

Jael watched Arcona wander out the door of the Silver Moon Scrying Shoppe, clutching the piece of amber she’d pulled from the wish bag and looking a bit distracted. A part of her worried for Arcona, and she wondered if she’d been unwise to allow her friend to walk away alone.

“Let’s sit in the corner where we can have some peace.” Witch Casey steered Jael toward a small table set with a melted tallow candle and two chairs. She encouraged Jael to take the chair facing the window.

Jael sat. Her gaze drifted toward Devon and Becca, who were standing on the far side of the shop trying desperately not to look like they were eavesdropping when clearly they were.

Jael looked closely at Witch Casey for the first time and noticed how beautiful the older woman was. Witch Casey had curly red hair that cascaded to her shoulders and piercing blue eyes swept with a thick fringe of black lashes that looked convincingly real. Something about her crisp profile reminded Jael of the classic beauties of old Hollywood. “You have such a wonderful face. May I ask where you’re from?”

“I’m originally from Greece. Do I look familiar?” A brilliant smile lit Witch Casey’s face. “I used to be known as the second most beautiful woman in the world.”

“Were you a runner-up in a Miss Universe pageant?” Jael asked innocently.

“The Apollo!” Witch Casey looked scandalized. “My goodness, there’s only one. I must say, being hailed as the king of the gods, driving a golden chariot, and having grabby hands are a bad combination.”