Guest Cari Quinn and a Contest 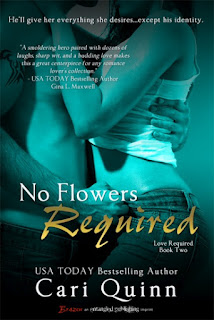 Blurb:
Love Required - Book Two - by Cari Quinn
He’ll give her everything she desires…except his identity.
Flower shop owner Alexa Conroy had it all before the recession hit and her customers fled to cheaper shopping grounds. Desperate to make ends meet, she sells her dream home and moves into the rundown apartments above her shop. When she spots six feet of sexy distraction—complete with muscles, piercings, and tattoos—ripping up flooring, Alexa knows the karmic windfall she’s due just landed on her doorstep.
And the attraction’s definitely not one-sided.
Dillon James, reluctant heir to the corporation about to foreclose on Alexa’s shop, is not about to jeopardize their scorching chemistry by admitting he’s not the building’s handyman. But with only weeks until her business goes under and his identity is revealed, Dillon must find a way to convince Alexa cooperation isn’t a dirty word, help her save the shop from his brother’s greed, and persuade her that he’s not the enemy…or risk losing the only woman who’s seen the real him.

Alexa moved whip-fast, slamming her hands on Dillon’s chest and him against the door before his brain caught up. The watering can clattered onto the ground. She spared it a brief, puzzled glance, then fisted her hands in his T-shirt and arched up, her mouth coming closer—
Fuck it.
He fused his mouth to hers, and dammit, it was even better than he’d expected. She didn’t yield to him but struggled a bit, as if she was shocked he’d taken over. That made it even hotter. He slanted his lips over hers when her startled squeak granted him access to the warm sweetness inside. Perfect. He took full advantage of her surprise to explore her with long, slow licks of his tongue.
Maybe his head couldn’t compute what was happening, but his body sure could. He cupped her ass and rocked his hips against hers, all too aware of his violent reaction to her nearness. His dick still hadn’t recovered from their bump-and-grind in her bathroom and apparently had no trouble asserting its readiness to play. Recovered now, she didn’t shy away, and instead rubbed against him, her curves sliding against him in a way that had him groaning and pulling back so hard he thunked his head on the closed door.
He couldn’t do this. Oh, God, he had to. She was going wild against him, and he didn’t have any defenses against his hunger for her. Not when he wanted nothing more than this. Just this.
“What are we doing?” he managed as she dragged her lips down his Adam’s apple. Stars danced in his vision and hell if he knew if they were from the head jolt or from their kiss.
She didn’t answer him, just skated her hands down his torso and under his shirt. And what hands they were. She seemed to be touching him everywhere. He clung to her ass as if she was his only port in the storm, and sure enough, a bolt of lightning sizzled overhead followed by a crack of thunder. But Alexa never paused. He’d become her canvas and her fingers were her paintbrush. She sketched every ridge of muscle, every line of bone. And then the column of his cock, wedged tight into his jeans. She touched him with confidence and skill, the kind that would soon have him driving his hands into her hair and pushing her to her knees if she didn’t stop.
But a woman like her wasn’t meant for a quick fuck against a door, even if that was what she acted like she wanted. Even if he longed for her so much that he didn’t care about anything but stealing this moment and making it theirs. He must be misreading her signals, though he was pretty adept at picking up sexual cues. Or else he’d sent some crazy ones of his own.
“Alexa.” Though it took all his faculties just to get out that one word, she ignored him. Completely.
She cupped him and nipped his jaw, her teeth offering a sharp counterpoint to her palm’s soft touch. His shaft lurched in her hold and she let out a delighted purr.
“Lex,” he tried again, her name ending in a moan.
“You don’t know who I am.” He expected her to stiffen, to look up at him with those huge bluebell eyes he’d gone a little nuts for the first time he’d looked at her. She didn’t.
“Alexa, listen to me.” He wrapped her braid around his hand and tugged up her head, something sharp dislodging inside him the instant their gazes clashed. In the waning light, he could just make out the lust on her finely boned face. It transformed her somehow, changed her from someone he should protect—from him—into a woman he needed at all costs. “You don’t understand.”
She didn’t. Hell, at the moment, he didn’t either. Because he didn’t feel like he was lying or hiding anything. He wanted to strip away the barriers between them, and this was the best way he knew how. Words were unnecessary, the language of miscommunication. Kisses and long looks and sultry touches—that was the truth, and she was the only one he could share it with.
Right now who he really was didn’t matter. She knew the important stuff. He was a guy. She was a woman. Certain areas were meant to fit together.Who even cared who his family was? Maybe she really didn’t even hate the hardware store. Maybe she had a secret girl-crush on it and went in there every day to fondle all the trusty hammers and saws…
Yep, he needed help. The kind he’d find alone by himself, far, far from distractions with anklets and eyes as big as moons.
“You don’t understand,” she whispered, gripping the back of his neck. She was tall for a woman, and even in flats she could reach all the important parts with only a modicum of stretching. “I don’t want to know who you are. I don’t care. All I want is for you to make me come.”