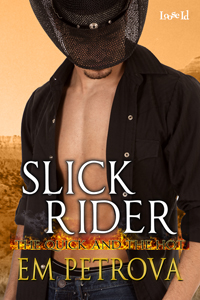 Five Things to Say in Bed
By Em Petrova

His name: Let your man know you’re not fantasizing about David Beckham (even though you might be) by saying his name. Punctuate it with a few “ooohs” and moans. It’s a good way to ease into dirty talk, which will light his fires!

Fantasies: What’s said between the sheets stays between the sheets, right? So let loose! Maybe you dream about having sex in a new place such as the kitchen or the backseat of the SUV when the kids are at the sitter’s. Maybe you’d love to introduce toys or a third partner. Talk about your fantasies during foreplay and see if some of them don’t come true!

Dirty Phrases: Simple phrases like:
“oooh, harder”
“Right there”
“Don’t stop”
Go a long way in the bedroom (or office cubicle or restaurant restroom!). Don’t skimp, but overuse these phrases and you’ll sound like you’re making an amateur adult movie!

Make it fun by vocalizing! I’ll leave you with a passage from my latest Loose Id release SLICK RIDER.

Blurb:
Physical therapy assistant Lilly’s job is to keep rodeo star Juss Rossie off his injured leg and from using his bad shoulder to rope more buckle bunnies. Trouble is she wants—just for once in her life—to be one of those rodeo gals who gets the cowboy. Pushing him to the limits of his therapy will take some creative maneuvering, and she finds he responds in the yummiest ways.

Juss hates like hell to be laid up with injuries and off the back of a bull. But being at the mercy of therapist Lilly is torture—especially when she gets in the pool, on the mat, or crawls into bed with him. Can he recover from her mind-blowing advances without losing his heart?

The bell for room four pealed for the third time in a quarter of an hour. Lilly Hall whirled around and glared at the light flashing over the door. The normally quiet alarm sounded like a gong in her head.
“Bed four needs something, Lilly. Don’t keep your patient waiting,” her fellow physical therapist assistant Katie said with a grin. Short-staffed as always during late summer. Everyone went on vacation and left the physical therapists to answer call lights.
“He needs something all right.” A kick in the chaps—bound and gagged. The insufferable cowboy was driving Lilly’s patience to the brink. If she heard his country drawl one more time, she was going to do something very bad. Like hog-tie him with a resistance band.
Juss Rossie, star of the rodeo circuit, was injured and on her turf. He was everything Lilly had dreamed he’d be—his game was smoother than aged whiskey and every hard inch of his body spoke of the power and control he exerted over the bulls he rode.
Now he was confined to a sling and a splint after taking a fall from Bushwhacker, one of the meanest, ugliest bulls on the Professional Bull Riders Tour. Juss had ridden it for seven seconds before he was flung off laterally, tearing his knee and dislocating his shoulder and popping several ligaments. They’d brought him in gritting his teeth in pain, refusing to take any pain meds. The first thing Lilly had done was help hold him down while a nurse administered a big fat shot to his tanned butt cheek.
Yes, he was wonderfully tanned—all the way to his toes.
And horribly infuriating.
The light over his door kept flashing. Having a long shift with a frustrating patient made Lilly grind her teeth and remind herself why she loved physical therapy. For two more weeks she was stuck with him in this private rehab center. Unfortunately, Juss Rossie had assigned himself to her every waking moment of those two weeks. Money could do that.
If she was being honest with herself, she’d admit she was like a cat in heat for the panty-drenchingly-sexy cowboy. How many times had she watched him on the Jumbotron being jerked all over the place and wished she could mount a man with that much skill?
As a physical therapist’s assistant, she often traveled to the arena with Doctor Paddington, who personally saw to several of the riders. She’d never seen Juss up close and personal before though. She would have remembered those steely biceps, corded forearms, hard chest…and the hat he would have worn dipped low over those smoldering black eyes that went with a blacker reputation.
They called him Slick Rider because he’d started out riding broncos, and it was rumored he liked to ride bareback. Actually, his reputation was that he preferred everything bare.
A tingle ignited between Lilly’s thighs. She contained the urge to squeeze them together. Getting hot and bothered at work was a pitfall of hanging around so much muscled flesh. An almost constant parade of rodeo riders visited this private center.
Lilly hadn’t ever dated a cowboy, but it was on her bucket list. Still, not one of the cowboys who had visited the center had ever lit a spark in her. She’d spent half of last night dreaming about being with Juss—bent over, pinned beneath him, and riding him.
The last image had finally awakened her, and she’d had to finger herself to get relief. Taking control of a powerful man like Juss was a dream she’d never forget. But the reality paled in comparison to her fantasies.
“Lilly,” Katie warned when Lilly continued to ignore the flashing light.
“Jeez— All right!” She burst through the door of room four.
He lay there like a tanned god. Long, sooty lashes framed gorgeous chocolate-colored eyes that melted every woman in his vicinity. He always wore a goatee, but since coming here he’d trimmed it extra short. Probably because he’d injured the shoulder of his dominant hand—his left—and was forced to use his right.
Her heart squeezed at the sight of his lazy smile. “Glad to know my money is employing the most attentive staff available,” he drawled.
Insufferable man. Fucking gorgeous, yes. But insufferable.
A crease lived between his dark brows, and his mouth was drawn.
But those eyes—there’s something deeper there than he lets on.
She leaned against the door and stared at him. “How’s your pain level on a scale of one to ten, according to that chart?” She gestured toward a mint-green paper taped to the wall, sporting ten faces in various stages of distress.
“Ten,” he said, his eyes unwavering.
“Is that so? I’m sorry to hear it. One would think a big strong cowboy who gets hurled off the backs of two-thousand-pound beasts could handle a little postsurgical pain. Ah, no matter.” She came forward, withdrawing a pen from her pocket but concealing it in her palm.
He waved her away. “Get out of here with that syringe. Damn, girl, you’re a wildcat.”
“Let me show you my claws.” She grinned and uncapped the pen with her teeth.
Realization sparked in his eyes. He leveled his gaze at her. “You gonna try to pump me full of ink for my pain? Try it and you’ll be sorry, Whiskey.”
She jerked to a stop. Confusion settled in her mind, but warmth tightened her belly. He had a nickname for her?

Amazon: http://www.amazon.com/Slick-Rider-The-Quick-ebook/dp/B00DUHRMI8/ref=sr_1_1?ie=UTF8&qid=1373475988&sr=8-1&keywords=slick+rider+em+petrova
Loose Id: http://www.loose-id.com/the-quick-and-the-hot-slick-rider.html
Thanks for reading, and a big thanks to Amber Skyze for hosting me!

Em Petrova
~where words mean so much more~
www.empetrova.com