Where is Amber Today?

Today is New Release Day for me...

I have an interview over at Author Anne Lange's place...
http://authorannelange.com/2013/07/09/operation-seco…by-amber-skyze/ 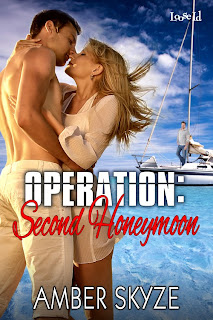 Excerpt:
“You okay in there, honey?”
The knock on the bathroom door startled her.
Damn you, Cole. Why couldn’t you stay outside a few more minutes?
“Just fine. I’m getting changed.”
“With the door locked? Since when do you lock the door, or shut it, for that matter.”
“Sorry, honey.” She hid the vibe in the striped towel and unlocked the bathroom door. “I’m sorry. I don’t know what I was thinking.”
She avoided looking him in the eyes. Avery knew she was a terrible liar.
“Are you sure you’re okay? You seem a bit jumpy today.”
She leaned forward and kissed him on the lips.
“I’m just fine. How was your day?” Did you go have a quickie with your friend Lynne? As tempted as she was to ask the question aloud, she refrained.
“Not as good as yours obviously. I didn’t have time to play around in the pool.”
“Oh that. That was nothing.” She brushed it off with a swat of her hand. “I really need to get dressed and back to work.”
Avery turned around to find her clothes. As she bent to put her underwear on, Cole came up behind her and rubbed his fingers across her pussy.
“Well, well, well. If my wife isn’t drenched. Did someone come?”
Avery held her breath and tried to think of a good reason for being wet. There wasn’t one.
“I needed a quick orgasm to relieve some job-related stress. I used my finger vibrator for a speedy result.”
“Really? And you knew I was home. I could’ve given that clitty a good tongue licking. What’s up with that?”
“Honey, you know I’d give anything for you to lick my pussy, but I’m superbusy. One swipe of the tongue leads to a bunch of other things that I just don’t have time for.”
“Like a blowjob for me?”
“Exactly. I only needed to relieve some stress, but if you’re going to make a big deal out of this, my quickie will be wasted.” She pretended to be angry. She wanted to get dressed and head back downstairs to the safety of her desk. She didn’t want Cole to know her pulse raced, and she didn’t want to spill the beans about the e-mail she’d read. If she gave it away without proof, he’d deny it. She needed time to collect her thoughts. Instead of devising a plan of attack, she’d planned a seduction. Only she never had time to ask Owen the magic question.
The quick orgasm was exactly what she’d needed to ease the ache in her pussy. Now, as her breathing returned to normal, she had to get dressed.
“Are you sure your relief is only stress-related?”
She stopped breathing. What was Cole suggesting?
“Of course it’s stress-related. Why else would I do it alone?”
“Exactly what I wanted to know.”
He moved closer, and Avery felt his warm breath on her neck. His cock pressed against her skin. Shit, he was rock hard and ready for sex. She didn’t have time right now. She should be working, not standing her in her bathroom naked and about to be taken by her husband. A husband she suspected was cheating on her.
“Cole, I’m confused by what you’re asking.” She feigned innocence. If he was saying what she thought, this conversation could get ugly.
“Avery, you know exactly what I mean. This,” he said while gliding his finger over the folds of her pussy, “this isn’t from being stressed by your job. This is from being so close to Owen. Would you like to fuck him?”
“What? Absolutely not. Why would you ask me something like that? You know I’d never cheat.” Unlike you.
Avery’s chest rose and fell as her heart raced. She didn’t like the direction this conversation was taking.
“I’m not suggesting cheating. I’m suggesting a threesome.”