I'm currently revising my 2009 release Rein Me In. The new title is Retail Therapy. The story is a quickie about a woman who loves to shop - at her husband's expense. :)

I'd like to thank my friend Lyn of Stanzalone Designs for making this cover for me. 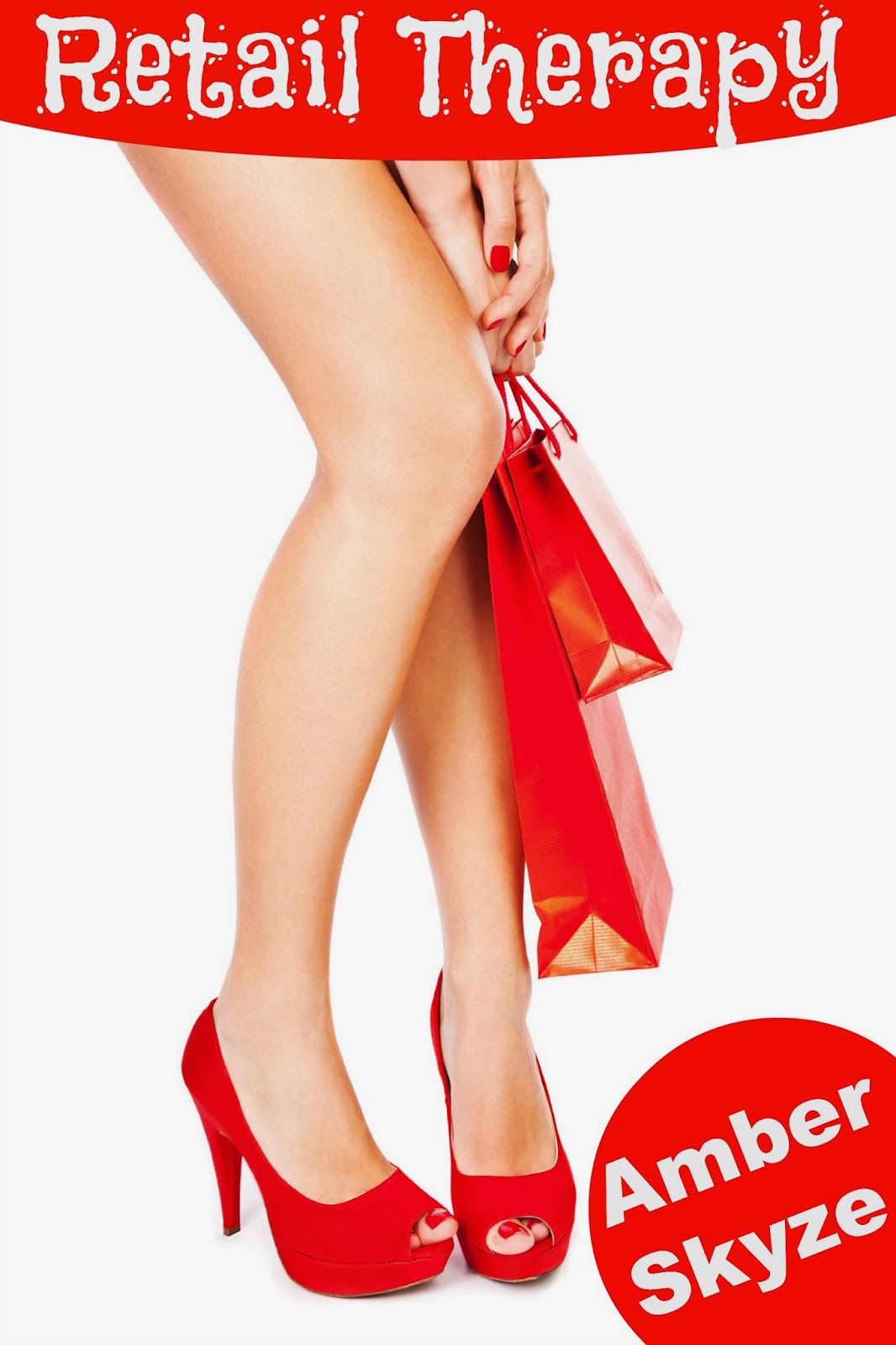 Blurb:
Delia is happy being a stay-at-home wife, spending her husband's money. Only
problem? Scott doesn't share her enthusiasm. Yes, he wants his wife to enjoy the finer
things in life, but he wants her to stay within a budget.

Delia can't stick to a budget.

To teach her a lesson, Scott paddles her.

Who knew getting spanked could be so arousing? Not Delia, but now that Scott's
turned her on, she wants more. In fact, she might go over her limit just to feel the
heightened orgasms.

Can Scott rein her in before they both end up in the poorhouse?

Delia paced the bedroom carpet in her silk pantyhose-covered feet and wrung her
hands. The tone in her husband’s voice confirmed he’d seen the pile of bills. He’d just
gotten home from work, and she imagined he’d tossed his briefcase on the kitchen table
and glanced through the junk mail until he found the credit card statement—the one
she stuck at the bottom of the pile in the hope he’d give up midway through. No such
luck.

She pictured him tearing it open with a need to know if she’d gone over her
monthly limit yet again. He’d scan the statement looking for the new charges, and upon
discovering what she’d purchased, hit the roof.

His voice echoed through the house. “Delia!”

“In the bedroom,” she called out. She couldn’t hide. The bedroom was his next stop
after reading the mail.

When his heavy footsteps hit the stairs, Delia held her breath. What was he going to
do? He warned her not to overspend again, told her she wouldn’t like the consequences
if she did. And she had.

She couldn’t help it. She liked to shop. She liked having new clothes, purses and
shoes. Never mind the music and workout equipment she bought to keep the trim body
he loved so much.

He appeared in the doorway looking dishevelled. His tie hung loose and the top
button of his crisp white shirt was undone. His trench coat hung off one shoulder. His
blond hair was a mess. He’d been raking his fingers through it. His dark eyes flared,
trumpeting his fury. She recognized the look and it boded trouble.

“What did I tell you about going over your limit?” he demanded. He seemed
almost saddened by her lack of control.

She stifled the urge to roll her eyes and bite back the smartass remark. The situation
didn’t call for sarcasm. “I’m sorry?” Even to her, the apology sounded weak.

“That’s what you said last month and the month before. How many times will I
hear I’m sorry? Why can’t you stay within budget so you don’t have anything to be
sorry for?”

“I tried, Scott, really I did. I wanted to work out at home rather than the gym so I
bought the equipment.” She lowered her eyes. “I thought you’d want me to exercise at
home, away from all the young men’s prying eyes.”
“Don’t give me that crap,” he roared. He walked to his closet, swung open the
double doors, and hung up his coat.

“It’s not crap; I do want to exercise at home.”

“Okay, but what about the other charges from the shoe store you love so much or
the various clothing stores. What’s your excuse for those?”

She didn’t have one. Just boredom. With all the free time she had on her hands she
used it shopping. Scott had told her she should find a hobby and she had—shopping.
“Well, Delia, aren’t you going to come up with an excuse?”

She shook her head.

He laughed and pulled the tie from his neck. “Nothing to say? This is a first.”

“So you’re going to play the quiet mouse game today. You won’t be quiet for long.”

“Why not?” The conversation wasn’t going well. Would he take away her charge
cards, make her stay home every day? The look in his dark brown eyes told her trouble
was on the horizon. Would he leave her for overspending?

He rubbed his face with his hands and sat on the edge of the bed. She wanted to
reach out to him, reassure him she wouldn’t overcharge again. She’d promise, beg, and
plead, whatever it took to keep him in her life. She didn’t want him to leave. She could
handle anything―anything but him leaving. She loved him. Always had and always
would.

“Over my lap,” he said with a ring of finality.

She backed away from the bed. “Excuse me?”