Her Immortal Viking by Adele Downs 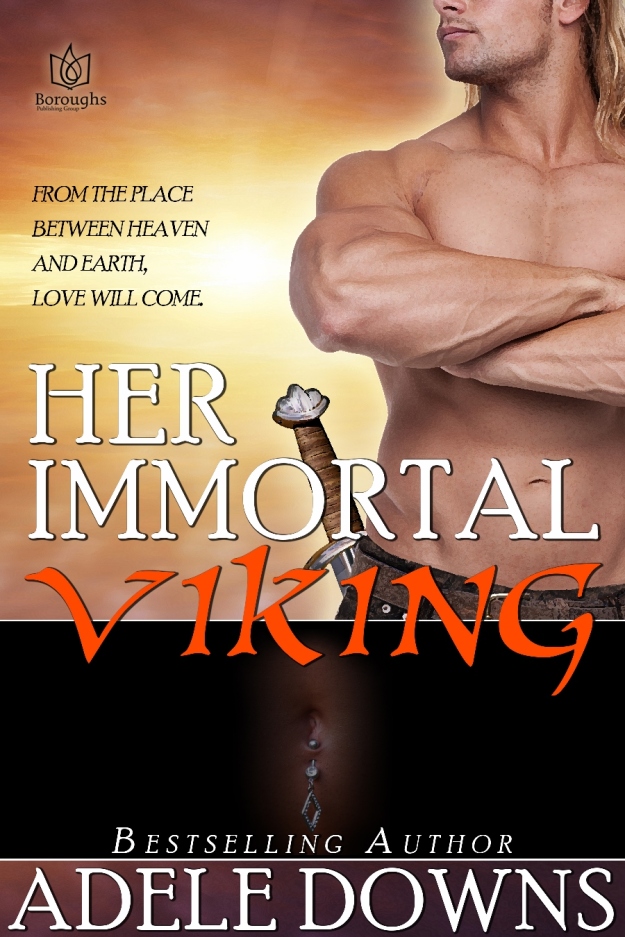 Penny pleads for divine intervention from overwork and mountainous debt one desperate, lonely night. She sings songs of praise, chants like a yogi, and rubs her belly like Buddha until the crystal charm on her navel shimmers, hoping to draw the attention of someone up there.

From the place between heaven and earth, in the west beyond the seas, an immortal hears Penny’s cries. Once a fearless Viking warrior, Gunnar has been cast into eternal servitude by an angry god and made a Light Elf. While Penny sleeps, he comes to earth from Alfheim for a single night to complete her tasks. When she awakens and confronts him, the handsome immortal kisses her, sparking a night of forbidden passion. By dawn, the couple has fallen in love.

Dark forces target Penny, seeking revenge for Gunnar’s earthly misdeeds. To protect his mortal lover, Gunnar takes up his sword to defend her. Though his strength and courage are unmatched, it might be the power of Gunnar and Penny’s love that saves them both.

EXCERPT
He smoothed her hair and rubbed a thick tendril between his thumb and forefinger. “I am Gunnar.” He pronounced the name Goo-nar.
An emblem of the sun, surrounded by a circle, had been branded on the back of his powerful hand. Penny touched the scar while he held a length of her hair, recognizing Freyr’s sacred insignia from her textbooks. “The pain must have been excruciating.” Without thinking, she lifted the old wound to her mouth and laid kisses along its perimeter before pressing a kiss to the icon inside.
Tremors vibrated across her lips when they touched the ancient symbol and her body tingled with the contact. The brand grew warm and then hot against her mouth, though it did not burn. She ran her tongue over the thick scars to erase the heat, and then licked the center, finishing with a tiny swirl.
Gunnar’s gasp of surprise was the last thing she expected when she lifted her head. He released her hair and drew away.
“I’m sorry. I don’t know what got into me. Have I offended you?” She’d always been popular with men, and comfortable around them, but her behavior with Gunnar was bold, even for her. She sat up. “Am I under some kind of spell?”
Gunnar shook his head. “I used my powers to heal you, but your free will remains intact.”
She searched his face for clues about what to do next, because desire shone behind the wary expression in his eyes. Something else shone there, too. Gratitude. Penny waited for Gunnar’s reply without letting go of his disfigured hand.
He said, “Kindness isn’t something I’m used to finding. Perhaps you’d be less inclined toward compassion if you knew what I’d done to deserve this brand of servitude.”
She reached out and draped an arm around his neck to bring him closer. Their gazes locked and held. Gunnar’s eyes were like pools of ice blue water that pulled her in and down.
Her breathing slowed while the sound of her heartbeat rushed blood through her ears. “I am Penelope. And if you’re from Alfheim, I know who and what you are. I just don’t understand why you’re here.” How could she deserve his rare, benevolent gifts? She was just an ordinary woman from an ordinary town, barely scraping by.
His warm breath grazed her cheek in shallow rushes, lifting goose bumps across her skin. His wide, firm mouth smelled of sweet ground parsley and fresh-picked mint. “Sometimes we get what we need, simply because we ask. That’s the beauty and power of the unexpected.”

wp-image-11742" height="378" src="https://tonyaloveslife.files.wordpress.com/2015/02/her-immortal-viking-author-photo.jpg" width="252" />
AUTHOR BIO
Adele Downs writes best-selling contemporary romance inside the office of her rural Pennsylvania home. She is a former journalist, published in newspapers and magazines inside the USA, UK, and Caribbean.

Adele is an active member of Romance Writers of America and her local RWA chapter where she serves as a past-president. She has written several articles for RWR magazine (Romance Writers Report) and has presented workshops for writers.

When Adele isn’t working on her current project, she can be found riding in her convertible or reading a book on the nearest beach.

This Event Has Been Organized & Hosted By