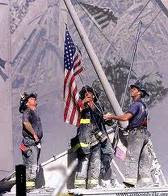 I remember 9/11/2001 like it happened only yesterday. I was getting ready for my job at the phone company when my mother called. She was clearly upset and told me to turn on the television. I did and watched in horror as the second plane slammed into one of the towers.
I called out to Norm who was in my kitchen replacing my floor at the time.
"You have to see this, Norm!"
We watched it over and over again. I hung up with my mother and finished getting ready for work. I'm not sure if Norm went back to the kitchen, but I didn't care. I could understand being glued to the television.
At work we were faced with dead silence. Verizon was taken out in the attack, putting most of our business customers out of service. Our company closed that day.
As a friend and I drove around aimlessly I remember the eerie feeling of no planes in the sky. We worked near the Albany International airport. There was always planes in the sky. Not that day.
My cousin and a bunch of her friends had spent a wonderful week in the Dominican Republic. All their money was spent and now they couldn't fly house. Family and friends had to wire them money to keep them in a hotel until the no fly rules were lifted. A week later they arrived in Upstate NY safely.
My mother would call me a few days later and ask "Who is Norm?"
I explained he was the guy my landlord hired to replace my kitchen floor.
I was a single mom at the time and she wanted to know why her daughter had a strange man in her house so early in the morning. Looking back that was the only bit of humor from that day.
Today we still mourn all those who lost their lives and the troops who are fighting for our freedom.
Today, take a moment to remember. Cherish your family and friends, be thankful for our freedom and God Bless Our Troops.
Posted by Unknown at 7:05 AM