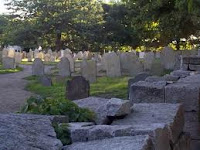 Saturday the DH and I, along with two daughters and a friend went to Salem. The trip originally was going to be just the DH and me. I had lots of plans for browsing the shops, maybe a tarot or palm reading, and research for a new series my friend Katalina Leon and I plan to write.
Fast forward – the teens ruled. They did haunted houses, waxed hands and got a history lesson. Yes, I had to incorporate history. See Martha Carrier is one of the women who was hanged and accused of being a witch. One of Martha Carrier’s sons was our ninth generation grandfather. So we brought the girls to the stop where they were hung and a memorial now stands. I must say L was very impressed and sad for the people who were hung. She refused to visit the cemetery next door because she didn’t want to walk on dead people. They’ve been buried for over 400 years. I’m sure they’ve been walked on many, many times.
I did walk away with one idea, something from the girls. I’ve pitched it to Kat and hopefully she’ll like it and we’ll roll from there. Details to come later. :o)
I have to say Salem in October is the best. The costumes were plentiful and creative. There were tons of people, rides, and stuff to do. The shops are not baby stroller friendly so I spent most of my time window shopping.
Next year my mom wants to return so we plan on booking a room and spending the weekend. I’ve already started looking for rooms for next year.
Happy Monday!
Posted by Unknown at 6:20 AM