I always enjoy having Tina here. So please give her a great big welcome. 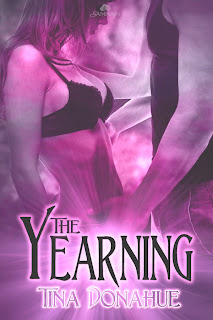 So You Write Romance, Huh?

It’s that ‘huh’ that always gets me when a new acquaintance learns I’m a romance writer. Even before any additional questions are asked, I can often see growing disdain in the individual’s eyes. I can sense what’s going through the person’s mind.


Romance is so lame.

Romance is so cheesy.

Romance is easy to write.

*pause for a deep breath while I’m fighting the urge to roll my eyes, scream or maybe even laugh*

Nothing, and I do mean nothing, is harder to convey on a page than emotion. Engaging a reader to feel what your characters do, to bring your reader to tears, to have them laugh or sigh, is a monumental task.

Cheesy? I don’t think so. Lame? Only for people who can’t feel. Easy to write? Not in a million years. I sweated over each word of those novels and was rewarded by readers telling me I made them cry, laugh, sigh.

That, my friend, is real writing.

And then, after many years of writing contemporary romance, I tried my hand at a paranormal – The Yearning. As with my other works, I wanted depth for the characters and plot, dealing with issues of jealousy, stalking, guilt and redemption. The reviews have been great. TwoLips gave it a Recommended Read, while Whipped Cream Reviews gave it 4.5 cherries. :o)

The Yearning is a bestseller (wheeee), and now it’s in print (double wheeee).

Here’s the blurb and an excerpt:

To break this curse, they’ll have to turn the heat up. Way up.

Jasmine Dante prowls Key West’s nightlife, fighting a losing battle against a jealous rival’s curse that forces her to seek carnal pleasure, no matter the danger. Weakened from lack of sleep, driven by insatiable lust, she spots a man who stirs her desperate craving, and begins yet another dance of seduction.

Except the dark stranger who returns her direct stare is no ordinary lover. Inside his powerful body lies a raw sexuality that just might be enough to break her curse. There’s only one way to find out: imprison him in her bed and feed on his passion.

Former U.S. Marshal Mike Stearn is many things, but he’s no woman’s sex slave. The deadly telekinetic power he ruthlessly suppresses comes alive again at Jasmine’s touch. Beneath her bold, potent sensuality he senses vulnerability and desperation. He may be in handcuffs, but she’s the one who’s enslaved.

As Mike resurrects his power to free himself so he can find the curse’s source and defeat it, Jasmine revels in his masterful rule. Her ravenous yearning evolves into rapture as she surrenders to his hunger, her darkest needs—and the emotional connection that lies beyond. Unless the curse takes her life first…

Warning: Tons of steamy sex, smoldering passion and a to-die-for love story with a hot Alpha hero who finds himself imprisoned by one sultry and desperate babe.

You will want as I want. You will know insatiable lust, but no peace.

Despite the danger, unending desire drove Jasmine Dante through the Blue Bliss Club, a hangout for locals in Key West. Slow-dancing couples clung to each other in the intimate atmosphere. Turquoise lighting gave the place a dreamy underwater feel, while tiny azure bulbs sparkled like Christmas decorations on the palms flanking the bar.

A man Jasmine had just noticed sat on the last stool. No more than mid-thirties, he wore his long, black hair tied back. Sharp, masculine features, dark eyes and a coppery complexion revealed his Native American heritage. Unlike many of the other men, he didn’t wear the ubiquitous flowered shirt, shorts and flip-flops. Black mocs hugged his large feet. Jeans and a T-shirt the color of midnight clothed his lean, muscular frame. Beneath his right sleeve, she spotted a bold tattoo of what looked to be an eagle.

She pictured her mouth on the strong design, her tongue roaming his slightly salty flesh, her fingers travelling over his hard abdominal muscles and beneath his jeans’ waistband, seeking the thick, fragrant curls below. Unendurable yearning sliced through her, quickening her heart. She moved closer.

His attention didn’t stray from tonight’s band, a new group named Engaged. Their R&B throbbed soulfully, evoking the seductive richness of Alicia Keys, Jennifer Hudson and Toni Braxton. The lead singer, a slight young woman with heartache in her eyes, seemed to perform solely for him.

Were they together? Was he waiting for her set to end? Panic flared, pushing Jasmine to do something. What? her mind cried. Fight another woman over a man she didn’t know? Months ago, she would have found the notion ludicrous and daunting. Since crossing paths with Desiree Zazou, everything paled beneath Jasmine’s consuming lust.

The woman’s mocking voice echoed in her mind: “You will want as I want.”

A bead of sweat slithered from Jasmine’s temple to her cheek, intensifying the fragile, dewy scent she wore. Her steps slowed as she regarded the singer.

The girl dipped her head in a gesture of farewell to the man, then sang with equal passion to another guy who leaned against the satiny blue wall.

She’s playing to her audience, Jasmine thought, it’s a part of her act. She probably doesn’t even know him. Though relieved, she remained shaky inside and stopped at the end of the dance floor.

Someone bumped into her. She stepped aside and froze as a young redhead in a scarlet Band-Aid dress tottered toward the man, her gait unsteady from drugs or too many drinks. He noted her blurry smile and offered a guarded expression in return. Twisting her hair and holding it back with one hand, the redhead pressed close, her ample breasts snuggled into his sculpted biceps, her mouth to his ear. Whatever she said made his dark brows lift.

Heart pounding, Jasmine glanced over and captured the server’s wrist as the twenty-something girl—Sara, by her nametag—tried to move past. Jasmine kept her voice raised just enough so the music and singer wouldn’t drown her out. “See that man at the bar on the last stool?”

Server Sara put her voice at the same pitch. “You kidding? Me and about a dozen other women got him in our sights, including the one who’s with him now. You thinking about sending him a drink?”

“Whatever he’s having.” Afraid to use a credit card the police could trace back to her if anyone reported him missing, she took a twenty out of her evening bag.

The bill went into the front pocket of Sara’s cobalt blue apron. “What’s your name? So I can tell him.”

No. She couldn’t chance the girl putting any name to her face. “Have the bartender point me out. And keep the change. Please.”

“You got it.” With a savvy wink, Server Sara turned and wove through the crowd.

One of the bouncers, an older guy with a shaved head and goatee, watched the redhead as she clung to the man and continued to speak. Jasmine saw the building annoyance in the man’s twilight eyes. Before he had to do anything about it, a trio of giggling young women joined the redhead. All wore skimpy, skin-tight dresses in a rainbow of shades: bright yellow, grass green, purple as deep as a bruise. They tried to coax their friend back to the dance floor.

She flung out her hand to shoo them away. The bouncer stepped forward and said something the young woman didn’t like. Head whipped to the side, she gave him a frown. A tense moment passed during which the other girls convinced her to leave.

Jasmine feared the man would do the same, fed up with aggressive females. What would she do then? Follow him outside and pretend she wanted to know the time? Ask for directions to another bar, maybe one on touristy Duval Street? Invite him to join her? And if he didn’t, would she be able to find someone else to ease her ravenous yearning or would he stay in her blood the entire time, making her lust even worse?

Seconds crept by. The air hissed with uncertainty.


He settled back on his stool, absorbed by the smooth tenor sax and the songstress’s smoky vocals.


Jasmine remembered to breathe. Closing her eyes briefly, she wondered if he was a musician, given his interest in the band. He certainly seemed to be a gentleman, considering his restraint with the redhead. However, this was a public place. What would he do when he thought they were alone? Travis, the last man she chose, would have harmed her, if not for her sisters’ intervention.


Recalling that night, her insides rolled, though it didn’t stop her. She watched the female bartender accept her twenty. To the left, Jasmine’s younger sisters, Violet and Lily, sat at a corner table, their apprehension palpable. When she made eye contact with Lily, her youngest sibling rose to join her. Violet grabbed Lily’s arm, a reminder to sit. Worried they might argue and ruin everything, Jasmine shook her head, warning them not to be obvious. To the casual observer and especially to the man, they shouldn’t appear to know each other. Thankfully, they didn’t look like sisters. Violet, with her light brown hair, hazel eyes and pale complexion, resembled their late mom. So did Lily, even though she’d dyed her brown hair platinum and wore it in a close-cropped boyish style. Jasmine, on the other hand, had her late dad’s olive coloring, dark brown hair and blue-green eyes.


Violet inclined her head toward the man. Jasmine looked. The bartender had already slid a bottle of Dos Equis to him. They exchanged comments, and then the woman lifted a slender forefinger and pointed to Jasmine.

In his hooded eyes, she saw fulfillment, no matter how fleeting…his confining weight trapping her, the ends of his untied hair skimming her bare shoulders, his mouth hard and ruthless. A virile male she wouldn’t have dared approach before Desiree changed her destiny, falsely accusing her of taking Connor Rolands, the man Desiree wanted.


Now, the curse drew Jasmine to this man as the road to Hell seduces a born sinner. She walked in time to the music’s sensual beats. Inwardly, a part of her cowered. For him and what would soon come, she offered a welcoming smile.