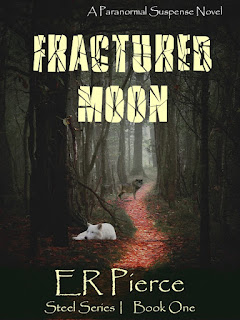 Aurelia Fridell will always be a freak. Born to werewolf parents, her twin brother Ville can shift forms, but she can't. Twenty-five years searching for answers yields nothing.

As her thirtieth birthday approaches, isolation creeps in, and worry settles in her gut. She accepted her existence long ago, and yet lately, she's felt off-kilter. Eyes follow her, prickling her senses. Her headaches are getting worse.

Is she paranoid, or is there really someone, or something, stalking her? Watching. Waiting. Drumming fingers to a sinister beat she can't hear.

Ceithin Starkley isn't looking for a mate. Especially now. In fact, he doesn't believe in true-matings at all. While he is being recruited for a new job, a scent on the wind stuns him, and he finds himself fighting an inner battle he never wanted, yet can't ignore.

Sparks fly, as Ceithin and Aurelia fight fate and race against a clock neither knows is ticking.

Will he claim Aurelia before he loses her for good?

Warning: This book is sexy. Contains a drool-worthy Alpha male wearing Beta clothing. A sassy and sweet heroine with brains and brothers you'll adore. A best friend every girl would love to hate. I mean have, and an impossible road no one will see coming.

Maneuvering my way amongst the hoard of sweaty people was easy; finding a man to dance with proved more difficult. I sashayed my way to the middle of the crowded floor and began to dance. The music pulsed with eroticism, and I moved to the sensuous beat. My skirt made it difficult to dance, so, on a tenuous note; I stopped, grabbed the hem and tore five inches off the bottom. I noticed I'd ripped slits up the side when I kicked that bitch in the head, but I shrugged. I'd be a Lady of the Night versus horny librarian, tonight. My garters played peek-a-boo with the crowd as I rolled my hips and soon, a crowd of men surrounded me.

Astrid sidled up on my right and we began to dance in earnest. I channeled all my rage and devastation into a sultry mix; I rotated my hips, dipped my trunk, and shook my tail feather. I had a good sweat going and my brain finally turned off. I didn't think. I was feeling. The hair on the back of my neck prickled, but I ignored it.

Ceithin could eat pond scum. Ok, so, I know I'm not being fair. I mean, really? What was he supposed to do, dump his longtime girlfriend like a bad habit just because he may have found his wolf mate? Would I have liked him nearly as much if he had?

Maybe I'd find another mate. Who says there is only one per person? Who knows, weird shit happens. Ville and I are proof of that.

His eyes caressed me from across the room. Watching me move, the way my body twisted and turned to the cacophony of sounds and beats. So I turned towards the hallway entrance and there he leaned casually against the wall, looking hot and unattainable. God he was potent. The air around him reeked of danger. I stared back into his eyes, but he made no move to come to me.

I didn't dance for him. I danced for me. I was in a place where hurt couldn't roam free.

I closed my eyes and gave into the intoxicating way the dance held me in its grip. It was a release of sorts, a way to beat back the anger and frustration traveling within my body. Turmoil needed escape, and so I gave it one. With every grind, every hip roll, every step, I relaxed. My body became pliant. This was what I needed. The blonde wound my hair around his fist and pulled my head back. His lips and tongue traced paths up my neck to my ear as we moved in time to the rhythm.

He released me, then spun me around so my ass cosseted his erection. My hips rotated in a simulation of sex filled sheets and endless nights. He had one arm locked around my waist and the other curved around my breast. I rested the back of my head on his delectable chest. I opened my eyes and locked gazes with Ceithin, who'd plastered himself against the wall, but raptly watched us on the floor. He stepped forward; hands clenched, eyes radiating menace, but caught him-self. He stopped and shuddered, retreating back to the safety of the wall.

I shrugged. His loss. I stretched my arm up and snaked it around the Adonis's neck as he continued to fondle my breast lightly while nudging me with his growing erection. A pleasurable pinch made me gasp as he rolled my nipple between his thumb and forefinger. I shivered as my emotions turned into something darker. Need roared through me.

Bodies pressed closer as the crowd settled on the floor, and I lost sight of Astrid. I knew her well enough to know she'd be fine, but still, worry punched me in the gut. There were so many scents on the floor it was difficult to distinguish one from the other. Sweat, sex, and alcohol all cloyed for dominance.

As the song came to an end, I turned around to face my dance partner. It was time to go before I did something I'd regret later. I wanted to thank him for a fun time on the floor and leave on a high note. A fine sheen of sweat coated my body, and my eyes felt fever bright.

Buy Links:
Amazon:
All Romance (ARe)
Posted by Unknown at 3:32 AM