Merry Christmas! It's Release Day too!!
I'm giving away a copy of Tied Up in Tinsel to one lucky commentor. 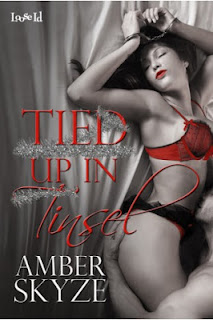 Blurb:
Trust isn't something Patience Middleton gives very often, especially in the bedroom. She's been looked at as a slut for wanting more than a vanilla sex life. When she meets William LaBorde he's offering everything she wants which is a whole lot more than she can handle. He wants to know all her deepest darkest desires, plus he's sexy, sweet and willing to make all her fantasies come true.
Patience gives in briefly until William gives her a familiar look of what she perceives as disgust. It takes some doing, but eventually he convinces her his only wish is to make her happy in the bedroom, against the wall or under the Christmas tree.
Things go awry again, though, when Patience's dream fantasy turns into a nightmare. Can William save the day and will she finally give herself to him; body, heart and soul?