Welcome to the 12 Days of Christmas Contest. Each day will be something different. Could be an ebook, a print book or a gift card.

Winners from all the contests will be announced on December 26th. Please be sure to leave an email address so I can contact you if you win. 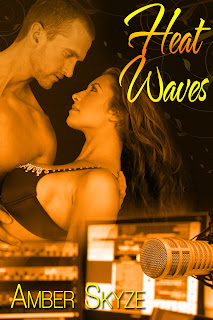 Blurb:
Ever wonder about the face behind the voice of a radio DJ?
Nina Walters has. She can’t get enough of disc jockey Ty’s sexy baritone. He has her masturbating to his voice daily. When he challenges his listeners to a contest Nina wants the upper hand. Lucky for her Cindy, her best friend works at the radio station.
Ty is offering a dream date, with him, to one lucky winner. He’s almost positive no one will guess the answer correctly.  So, when Nina does he’s floored. Being a man of his word, he goes through with the date.
Sparks fly, but secrets linger. Will their heat for one another be enough to ride the waves of deception?
Excerpt:
“So are you tired?” she asked, lifting his shirt and running her fingers up his stomach.
Was he tired? How could he possibly be tired with such a sexy woman stirring his manhood awake?
“Depends. What did you have in mind?” he teased.
“A little of this.” She reached up and kissed his neck, while her hand worked the button of his jeans. “And a little of this.” She nibbled on his earlobe, rendering him useless.
He grabbed her and tossed her down on the seat. “I’m not tired in the least,” he said, tugging at her shirt. “I want to devour you.”
She squirmed under his touch. “I’m feeling a little sleepy.” She faked a yawn.
Ty loved a challenge. “You can go to sleep, but first let me show you what you’ll be missing.”
He brought his lips down on her breast. He felt the bud hardening under the heat of his breath. His fingers roamed her soft skin, searching for the other breast. When he reached his destination he tweaked the nipple between his fingers. She closed her eyes.
“Very sleepy.”
She was going to play that way, was she? He’d show her tired. Lifting her shirt over her head, she didn’t resist him, but she didn’t assist him either. Laying like dead weight she continued with her pretend sleep. But Ty knew it was only a matter of time before she stopped faking and joined in on the fun.
With her shirt off and her bra opened, he worked on shrugging her out of her jeans. It wasn’t easy, but he managed. Now she lay fully exposed – an open invitation to do whatever he pleased to her.
He placed gentle kisses on her flat stomach. Tiny hairs stood on edge, her skin prickled under his touch. She was becoming aroused. He could smell it in the air. He admired her perfectly trimmed pussy as he made his way to prove his point. As he drew closer to her pussy her arousal became more pronounced.
Sleeping, my ass. Let’s see you sleep through this.
Posted by Unknown at 4:00 AM