Out of Her Dreams - Fran Lee 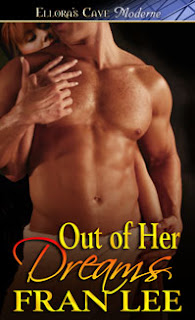 Today is dedicated to my dear friend, Fran Lee. She has a new release from Ellora's Cave. This is a must-read! Here is the link to buy your copy today!
http://www.jasminejade.com/ps-7256-50-out-of-her-dreams.aspx

Blurb:
She’s a best-selling erotic romance writer. Her fans adore her. She’s making excellent money. All by writing about a man she dreamed up many years ago. Her hero is handsome, virile, sexy, strong, sensitive and a complete gentleman.
He’s a hot-headed, sex-on-the-hoof pro wrestler. He has a reputation for being the hottest, nastiest man on the mats. The fact that his face and body are plastered all over a bunch of mushy romance novels written by a woman with a death wish doesn’t sit well on those massive shoulders. His agent’s demanding monetary retribution from the woman who’s dared to use his image on her covers but he has another form of retribution in mind…and it has nothing to do with money.
She was his the moment he touched her. He came out of her dreams to claim her, and she wants every hot, throbbing inch of that delicious man.
He wants her, naked, at his mercy. One hot, orgasmic night wasn’t nearly enough. She ran…but he’ll find her.
Excerpt:
She walked slowly across the luxuriously thick carpet to the ready supper table set up before the fireplace and looked about the decadently fabulous room. Obviously he had planned on a very private dinner and drink. She touched the bottle of champagne and swallowed hard. Dear Lord. She didn’t know if she could manage being alone with him again. She didn’t realize she wasn’t alone until his voice made her turn with a little gasp.
“You have my book?” The sight of him standing in the doorway of the luxurious sitting room made her breath leave her in a startled whoosh.
Control yourself, Sam. It is not polite to stare and drool.
She nodded jerkily, opening the bag and taking out the hardback copy. “Of course. You paid for it.”
She held it out as he walked across the room to stop a couple of feet from her. He looked awe-inspiring in a beautifully tailored silk shirt that was open to show his corded neck and a pair of trim Armani slacks. The material sleekly covered but didn’t hide the massively muscled body beneath it and her mouth went dry again. God but that man had a walk—predatory and as sexy as hell.
She had no idea real live men could look so utterly marvelous and perfect. Dream men could but certainly not real ones. Heat pooled and swirled in the area somewhere below her navel, moving into the suddenly damp center of her body as the man moved toward her like some big cat on the prowl, those dark eyes moving down her body to her feet before returning slowly to her red face. A shot of something honeyed and hot surged through her at that look and she knew exactly what was on his mind because the exact same thing was running through hers.
He took the book from her hand slowly and opened it to the flyleaf, his dark eyes touching the page for a long moment before returning to her face again.
“You were serious about that dream bit?” His voice was quiet. A small smile curved his lips.
Oh. My. God. That mouth.
She swallowed and nodded jerkily. “Yes.”

The sight of her standing beside the intimate little table for two sent a jolt of lust knifing through him almost painfully. David could almost taste her delicate floral perfume, along with the warm, delicious scent of a woman who craved what she saw. She stood bravely erect in an incredible blue silk dress that hugged every lush curve she possessed. The warmth of her body and the need in those emerald eyes fired his blood and made his groin swell and come alive with a vengeance. He found himself staring like an idiot. A horny idiot.
It was suddenly hard to remember why he had asked her to come. Was it to discuss the books, or was it simply to see her again? To take her and slowly strip her and taste her soft skin with his lips and tongue until she begged him to bury his cock inside her and finish it up right? Okay. That sounded good. Damn good.
She handed him the book with nervous hands and he wondered what those hands would feel like moving over his naked body. What she would think if he just tossed the damn book and dragged her against him to let her feel how rock-hard he was and how much he craved her. And as he opened it to stare at the autograph she had scrawled over the flyleaf page, he knew that she was not leaving here tonight until he had tasted every inch of that creamy skin.
Want to learn more about this incredible author? Check out her most recent interviews:
http://monarisk/.blogspot.com and http://coloradovixe/ns.blogspot.com
Posted by Unknown at 5:37 AM