Playing In the Sandbox

If you ask a speculative fiction author what she enjoys most about her genre, it’s a good bet she’ll tell you “worldbuilding.” Creating a fantasy or sci-fi world from scratch is, at least for me, one of the most exciting steps in the writing process. Even more interesting, though, was the process of creating an alternate universe: a modern-day America with a twist.

In Anchored: Belonging and my new release, Where He Belongs, I’ve had the pleasure of building a contemporary world wherein slavery is legal pretty much everywhere. As part of that exploration, I built a very self-serious website, BelongingVerse.com, that treats the visitor as a citizen of the world of Belonging.

Along the way, something extraordinary happened. My dear friend and occasional co-writer Aleksandr Voinov asked a question fanfic writers—but not, for some reason, original fic writers—hear quite a lot: “Can I play in your sandbox?” He wanted to write a story set in the Belonging-verse about a slave boxer named Brooklyn Marshall. I was tickled. How could I say no?

So rather than talk on and on about my own books today—which, let’s face it, authors do an awful lot of when they’ve just released a new one—I thought I’d give a shout-out to Aleks and his brilliant book, Counterpunch. Here’s a taste:

Fight like a man, or die like a slave.Brooklyn Marshall used to be a policeman in London, with a wife and a promising future ahead of him. Then he accidentally killed a rioter whose father was a Member of Parliament and had him convicted of murder. To ease the burden on the overcrowded prison system, Brooklyn was sold into slavery rather than incarcerated. Now, he's the “Mean Machine,” a boxer on the slave prizefighting circuit, pummeling other slaves for the entertainment of freemen and being rented out for the sexual service of his wealthier fans.When Nathaniel Bishop purchases Brooklyn's services for a night, it seems like any other assignation. But the pair form an unexpected bond that grows into something more. Brooklyn hesitates to call it “love”—such things do not exist between freemen and slaves—but when Nathaniel reveals that he wants to help get Brooklyn's conviction overturned, he dares to hope. Then, an accident in the ring sends Brooklyn on the run, jeopardizing everything he has worked so hard to achieve and sending him into the most important fight of all—the fight for freedom.

It won’t be out until November, I’m afraid, but you can read all about it—and about Brooklyn, his owners, and the stable where he trains—right here. And if you’ve ever thought about investing in your own slave boxer? Well, Fitzhughes Boxing Stable is the way to go.

The hottest name in network news is Daniel Halstrom. He is a sensation, a rising star. He is also a slave, owned wholly and completely by NewWorld Media.But before he was a star, he was a frightened child from a bad place with a promising, if limited, future ahead of him. In The New Kid, young Daniel begins his schooling. Then, for a slave, the simple pleasure of a Bathroom Break is sometimes the only pleasure to be had. Later, Daniel doesn't know it, but A Chance Encountermight be the most important of his life. Next, in Camera Obscura, one of Daniel's colleagues reflects on the fact that as much as the camera may show, it can hide even more. Finally, when you're a slave, Independence Day is just another day. 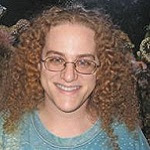 Rachel is an M/M erotic romance author and a freelance writer and editor. She's also a sadist with a pesky conscience, shamelessly silly, and quite proudly pervish. Fortunately, all those things make writing a lot more fun for her . . . if not so much for her characters.
When she's not writing about hot guys getting it on (or just plain getting it; her characters rarely escape a story unscathed), she loves to read, hike, camp, sing, perform in community theater, and glue captions to cats. She also has a particular fondness for her very needy dog, her even needier cat, and shouting at kids to get off her lawn.
She's a twitter addict (@rachelhaimowitz), and she blogs every M/W/F at Fantasy Unbound. She also keeps a website, of course, with all her current and upcoming projects. She loves to hear from folks, so feel free to drop her a line anytime at metarachel (at) gmail (dot) com.
Posted by Unknown at 7:00 AM