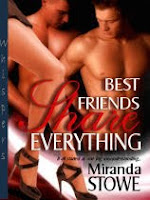 Okay, while Miranda Stowe isn't new to the publishing world, she is new to the erotic romance genre. When she announced she had a new release coming out the same day as me I anxiously awaited her blog informing everyone of the information on where to get the book.
I rushed over and bought a copy. I like supporting new authors as much as ones who have been around a long time. New authors though, need word of mouth.
I remember when my first book came out. I kept wondering why would anyone want to read a book by an unknown? (I still ask what keeps my readers coming back for more), but I'm not complaining. I love you guys and gals!
Anyway, I went over to Whispers Publishing and downloaded a copy. You could've knocked me over with a feather when I read the dedication. I was one of three authors Miranda dedicated her book to. How awesome. I decided to start reading the book right then and there. 45 mins later I finished it. It was fantastic. The heroes were yummy and the heroine was a woman you could relate to.
I'm highly recommending this story to all you who love menages....you won't be disappointed.

Here's a taste and when you're done reading it hop over HERE to purchase your copy!

Blurb:
It all started as one big misunderstanding. Jessie Sawyer’s boyfriend, Devin, gave her a key to his apartment and she merely wanted to thank him in a jazzy, make-your-wet-dreams-come-true kind of way. She had no idea his roommate, Conner, would come home so early and catch her posing in her new lingerie…with her hand between her legs. But what begins as one huge, mortifying experience soon turns into the most memorable, pleasurable night of her life when Devin finally shows up and neither man wants her to leave.

Devin considered falling face first onto his couch and passing out there for the rest of the night. But when he opened the door to his apartment, nearly plowing over two people as he pushed it inward, he jerked to a surprised stop.
His roommate grinned and his girlfriend gawked as he paused in the threshold. “Jessie?” he uttered, suddenly wide awake. The sight of her fresh, sweet face could always perk him to immediate attention. “What’re you doing here?” The he frowned at his bud. “Conner? I thought you had a date tonight.”
“I think I do,” Conner drawled as a slow smile curved up his sensuous mouth. His gaze veered meaningfully to the woman standing between them. “With you two.”
For a second, Devin frowned, confused. Then he glanced at Jessie. The pink flushing her cheeks made his jaw drop. “Oh my God,” he gasped. “You’re shitting me? A threesome? Really?” He began to grin until reality struck him. Wait, this was Jessie they were talking about. Miss Vanilla.
“Baby, are you sure?” he asked, stepping toward her and cupping her face. “I don’t want you to do anything you don’t want to do.”
She was the sweetest girl he’d ever dated. Generous and giving. She always had a ready smile whenever she saw him. But she was pure old school and he had no problem being a good boy with her because she made him feel amazing without all the kinky, adventurous stuff. But if she was willing to step out of her comfort zone—for him—then who was he to turn her down?
“This would be, like, the best surprise ever,” he murmured, pressing his forehead to hers. “But I know it’s not something you’ve ever done before.” He tried to swallow down his hopes, but his cock kept growing in his jeans.
Jessie’s big blue eyes were wide as she licked her lips. “I…” She was definitely uncertain. He didn’t want to press, but damn, he and his roommate knew how to orchestrate a fucking awesome threesome.
“Is this what you want?” she hedged.
“Here,” Conner’s husky voice broke in. Stepping close behind her, he gently took hold of Jessie’s wrist and drew it down to Devin’s zipper. “Does this answer your questions?” When he pressed her hand against Dev’s crotch, the warmth of her palm soaked through thick denim. He shuddered, and his dick twitched and swelled larger under her trembling fingers.
With a gasp, Jessie’s jaw dropped, but instead of tugging away, she tightened her hold around the bulge and began to knead him. “You really do want it, don’t you?”
“You’ll love it,” he coaxed. “I promise. We won’t do anything you don’t want us to.”
She bit her lip; temptation swirled in her eyes. She opened her mouth, but no words came out.
“I think she needs a little more coaxing,” Conner said.
Jess jumped and let out a yelp of surprise when Conner’s arms slid around her waist and then up her ribcage to cup two large hands over her breasts while he simultaneously bent his head to the side and kissed her neck through her hair. Though the intoxicating sight of those masculine hands loving Jessie’s perfect feminine breasts had Devin grinding his hips deeper into her hand, he hissed through his teeth, “Con. Don’t rush her. Remember, she’s never done this before.”
“She can take it,” Conner growled, nuzzling his nose through the locks of her hair until he found a warm patch a skin and nipped his teeth at the side of her throat. Damn, Devin knew exactly what that sweet skin tasted like and exactly how wonderful Conner’s mouth felt on bare flesh.
Posted by Unknown at 4:44 AM