I'm excited to have my friend Destiny here today. Check out her new book...looks HOT. 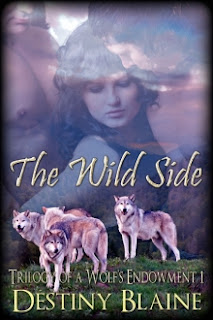 The wild side is an interesting stretch of territory where only the courageous survive.

Joe Kramer is a simple-minded young man tending farm with his father. When a neighbor needs a lift, his father sends him out to give the woman a ride. Soon, a Moonlight Clan Council member has her claws in Joe, leaving him a changed man.
Accepting his fate, Joe joins a wolf pack steeped in history and tradition, but someone among them is threatening to tear their pack apart. To make matters worse, as the pack master, Joe rebukes the traditions of the past while ignoring the mandated placement of two mates.
As he leads his pack to a position of strength, Joe will stand out as the clear Alpha destined to protect the East Tennessee Moonlight Clan Council, but will his lack of experience and immaturity cost the clan what they cherish most? And who, if anyone, will stand beside him when he fights to protect those closest to home?

Excerpt from The Wild Side
Trilogy of A Wolf’s Endowment, Book One
Copyright © 2012 Destiny Blaine

“What is it?” he asked, now longing to feel that spurt of heat, the end result one finally reached when pleasure sought became pleasure gained.
“You’re beautiful,” she rasped, cupping his cheek. “More handsome than I ever imagined.”
Her words drove him. Her praise consoled him. Through her, he was transformed and now he was larger than life. He bracketed his arm around her waist and drew her against him, noting the tightly drawn muscles as he gathered her small form and brought her to him.
A loud noise whipped around them like tornado winds. The truck window split in two, shattering into bits and pieces right before his very eyes. Animalistic instincts drove him as he thrust inside her, unable to stop and acknowledge the happenings around him.
His arousal heightened, reaching a peak he’d never expected. And something else occurred, too. The need to guard and protect, love and cherish, came over him like a breaking tide, leaving him torn between what he knew he’d felt before he took Rebecca and the feelings practically suffocating him now.
A deep-rooted howl fell from his chest. Canines jabbed through his gums, dropping over his bottom lip without warning. Elongated nails were the first inclination his fingers were no longer attached to hands, but to claws.
“What’s happening to me?” he asked, his senses sharper, far more profound.
“You were determined to resist me. You wanted to be difficult,” Rebecca told him, sliding away from his lap. “You should’ve let me get you off, lover. I would’ve bitten you at the right time and you wouldn’t have had to deal with him.” She pointed to the window.
Joe immediately recognized the man Rebecca fingered in an effort to place blame. Jacob.
“Now, Joe, you’re on your own.”

Labels: A Wolf's Endowment, destiny blaine, The Wild Side