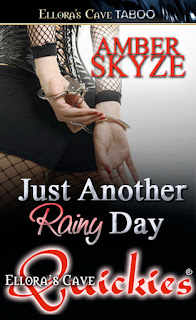 Blurb:
Tired of their ho-hum sex life, Jack decides to spice things up by planning a surprise for his wife. After sending the children off for an overnight with their aunt, Jack handcuffs Beth to their bed.Beth awakes naked, blindfolded and at the mercy of her husband. The day starts off with being fed by Jack and quickly turns into hot and heavy sex. She soon learns that a slip of the tongue can lead to stinging ass cheeks.This rainy day will be spent pushing their sexual limits. Whether in bed or out, Jack will leave Beth begging for more—until she says something unforgiveable.
By reading any further, you are stating that you are at least 18 years of age. If you are under the age of 18, it is necessary to exit this site.An Excerpt From: JUST ANOTHER RAINY DAYCopyright © AMBER SKYZE, 2011All Rights Reserved, Ellora's Cave Publishing, Inc.Chapter One“Rise and shine, sleepyhead.”Beth opened her eyes to total darkness. She attempted to move, but found her arms were pulled above her head. Around her wrists was soft fur. She tugged and the rattling sound of chains filled her ears. She was restrained. Fear spread throughout her body and into her throat.“Why am I handcuffed?” As she tried to sit up she realized she was also blindfolded. Never in their fifteen years of marriage had she woken to find herself trussed like a slave or prisoner.The smell of bacon wafted closer, assaulting her nostrils.“I’m going to fuck that pussy all day long.”Beth moved her head to the left where Jack’s voice echoed through the room. She shivered. The thought of him fucking her all day sent chills down her spine, until reality came crashing back.“What about the kids? Surely they’ll want Mom to cook them breakfast and drive them all over God’s creation.”“All taken care of. I just sent them packing with Auntie. They’ll be home tomorrow bright and early.”How long had she’d slept? She knew she was exhausted when she fell into bed the night before, but to sleep through the kids waking and Jack shackling her to the bed wasn’t like her.“Did you spike my drink last night, Jack?”A full belly laugh filled the room. “I’d hardly do something so sinister.”He had a point. In all their marriage he’d never even spoken an ill word against her. Why should she accuse him of something so hideous?“How did you manage to handcuff me to the bed?”“You were snoring peacefully. I moved your arms without getting a peep out of you. You barely stirred.”Beth racked her brains trying to remember any feeling of being moved around, but nothing came to mind.“Clever, Jack, now uncuff me please.”“No can do.”“Huh? Please, Jack. My arms can only take so much of being stretched like this. I’d like you to release me, now.”“Remember your prisoner fantasy?”How could she forget? She’d told him about the fantasy eons ago. They’d been enjoying a glass of white wine on a cold winter’s night. They’d nestled all cozy in front of the fireplace. As they gazed into the glowing embers, she had shared her deepest darkest desires. Beth had told him how she wanted to feel as if she’d been kidnapped, taken away and tortured in every delicious way imaginable. Jack had listened quietly and nodded at the appropriate times. She’d explained that she pictured herself in the shower after a long day. A stranger would appear and pull her soaking wet from the streaming water. He’d carry her to her bedroom where he’d take what he wanted. He’d ignore her pleas for him to stop. He’d fuck her until they were both sated.She’d thought he’d forgotten by now. Obviously he had been biding his time.“Is this what is happening today? You’re living out my fantasy?” A slight shiver passed through her body. Jack had listened. He’d taken her seriously and decided to give her what she needed.“We are and I’m in control. You will do as I say or suffer the consequences.”Beth shook as a chill of delight filled her. Jack’s voice was deep and demanding. He was using his dominant tone.“Got it.” A secret smile filled her soul.
Posted by Unknown at 10:41 AM