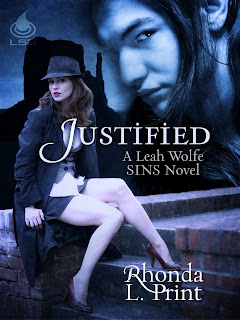 Rhonda is giving away a copy of Justified today!

Blurb:
Leah Wolfe, federal agent for the Supernatural Investigations of Non-Human Species—SINS—is determined to put the pieces of her personal life back together. Her relationship with Ian Nightwalker, her vampire lover and a Marquis in the vampire ruling council, has heated up and is going further than she’d ever thought possible.

When her ex-fiancé, Joaquin Wildhorse calls Leah in the middle of the night and asks her to come to the home of Louis Deveraux, Alpha of the largest wolf pack in the country, her first instinct is to hang up. Until he asks her to bring Ian. Lewis has been gruesomely murdered, leaving behind a daughter and a decree that Joaquin is to be the new pack Alpha.

Now as the slain bodies of more shape-shifters start turning up closer to home, Leah’s personal and professional lives collide. She knows who the killer is but legally can’t touch him. She'll need the help of Ian and Joaquin to step outside of the law and stop a killer to protect the lives of those she loves the most. If she can manage that, things just might get interesting.

EXCERPT:
“Mmm.” I moaned against his stomach. “I think we should initiate this house properly.” I unbuttoned his pants a slid his zipper down, freeing his erection.
Ian lost patience and ripped my shirt open, buttons flying. I laughed and then closed my mouth over his, still teasing him as I rocked over his erection. Ian’s hands grasped both of my breasts, kneading deliciously as his thumbs caressed my nipples. He took one in his mouth and sucked, causing warmth to pool in the lower part of my body and raising goose bumps of pleasure along my skin. I scissored his hair in my fingers as my body arched back to give him more access. The other nipple got the same treatment before I scooted down and took him into my mouth, my tongue playing along the hard ridge of the head, swirling and suckling until I pulled a groan of pleasure from Ian.
I opened my eyes and looked up at him. His head lay back against the chaise, his hair tousled and sexy as hell. His eyes were closed, mouth slightly open and I could see just the tips of his fangs as his breath came from him in short, quick rasps.
The book will be available from LSBooks.com
http://www.rhondalprint.com/