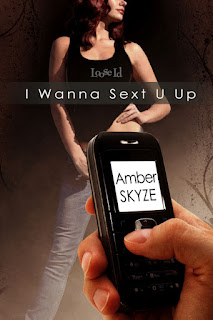 
Tool belt? Check. Rope? Check. Lube? Check. Violet wand? Check.
A simple text leads to a case of mistaken communication and before long Riley Anderson finds herself tied to her bed and being driven to distraction. Beckett Manning, host of Room Makeovers, knows how to tease and torture every inch of her skin. He also knows his way around an orgasm, which keeps Riley wanting more. And more. And more.
Beckett is ready to give Riley more than a remodeled kitchen. He’s about to bring her to the edge of ecstasy and back. Whether it’s hot sex in the bathtub or Riley hog-tied to the bed, he’s determined to show this brazen beauty how desirable she really is.

Riley thought she’d hyperventilate when Beckett sent her off on her own. So much had taken place in the last hour. Her head spun with information overload. Now she had a list of things to get and a cameraman recording her every move.

She looked around to see what aisle she was in.

She scanned the sheet to see if there were any parts she needed in this aisle. Nothing, but she was close. There were items she could get in twenty. With renewed confidence she headed in the direction of aisle twenty. She wasn’t going to let fear rule her. She was about to get a new kitchen, and she owed a great deal of thanks to Room Makeovers.

Her phone beeped, signaling a text message had arrived.

She cringed, remembering the day Terry sent the breakup message. Hopefully one day she wouldn’t flinch whenever she received a text message.

Riley dug into her pocket for her phone. She pressed the touch screen and read the text.

We need superlube for our male and female universal fittings.

Were her eyes playing tricks on her or was Beckett sexting with her? She turned to see where the cameraman was and what he was doing.

He stood a few feet behind her, clearly not too interested in why she’d stopped or the message she’d received.

How should she answer him? Should she sext him back or act innocent? She mulled the choices over in her mind. She couldn’t remember a time she’d sexted with anyone, and Beckett wasn’t anyone. He was the host of a famous cable show, and he was interested in her.

Without a second thought she decided to give it right back to him.

Don’t think you can get me wet enough? Tingling sensations coursed through her. A feeling of giddiness consumed her, and she giggled as she went back to the task at hand.

Flirting was something new to her. She hadn’t felt desirable in a long, long time.

Riley entered aisle twenty and used the directions on her paper to find the first of the required materials. She located the handles for the cabinet doors.

As she looked over the array of handles, the feeling of being overwhelmed took over again. She looked at the paper for guidance, but it wasn’t specific. The choice would be hers and hers alone. She decided on a brushed nickel design.

She turned to the camera guy.

“I think I’m going to need a cart or something to hold all this stuff.”

He nodded, and as if someone had heard her from beyond, a woman appeared with a shopping cart.

“I think you might find this helpful while you’re shopping.”

Riley laughed nervously. Had she entered the twilight zone? Was she wired and didn’t know it?

Ummm, I don’t have any doubt I could get u plenty wet w/o lube.

Her pussy grew moist. Her heart raced. She fanned her face with the paper. Oh my God. Oh my God. What do I say?

“Is there a problem?” Patrick asked.

Her head whipped to the side. He’d startled her.

“Umm, no. Just need to answer this. Everything’s fine.”

Was that a smirk on his face? Did he know something she didn’t?

Riley decided not to answer the text right away. She’d let it sit while she thought about her response.

She filled the cart with all the handles and knobs she’d need. She pushed the cart, satisfied she could check the first item off the list. The next aisle on her list was not too far. Aisle twenty-three was where the cabinets were. The sheet said to just pick out the style and the crew would do the rest. That would be easy.

As she walked to her next destination, an idea popped into her mind. She pulled out her phone and texted Beckett again.

Do u want me to pick out the hose extender?

“Let’s see what you think about that,” she said quietly.

“Are you talking to me?”

Shit. She’d have to remember she was on camera. Everything she said and did was being filmed.

“Nope. I have a bad habit of talking to myself.” It wasn’t a lie. Sometimes she had full-fledged conversations with herself. It was a terrible habit that had started when she was a child and continued into adulthood. People likely thought she was crazy, and she even thought so from time to time. “Okay, but you need to focus on the fact that we’re filming. You need to be aware.”

She wanted to jump up and down and show everyone her excitement. This was her first time ever being on television.

“I think we should have Beckett join us. You both can search for stuff together.”

“No!” As soon as the word left her mouth, she regretted it. She’d be working side by side with Beckett for as long as it took to finish her kitchen. She couldn’t refuse to shop with him.

“I mean, yes, but I’d like to do some of the shopping on my own first, okay?”

“How about I go film Beckett and leave you to pick out the cabinets. We’ll come back in about fifteen minutes.”

“I think that’s a great idea.”

Patrick walked away, and she sighed in relief. Would she get used to the cameras watching her every move? Maybe she could turn the tables on Beckett and see how he liked getting sexual innuendos while on camera. But first she had to figure out what style wood she wanted.

Labels: amber skyze, I Wanna Sext U Up, loose id