I want to wish all my readers a Happy Valentine's Day. I had planned to showcase my friends book yesterday and well, my daughter called frantic. Her daughter fell face first on the floor and possibly broke her nose.
The DH and I had to run out and give her my car so she could go to the hospital. By the time we got there our granddaughter was feeling sore, but in good spirits. Her poor little face was really banged up.
After a trip to the ER and no X-Rays, because T wouldn't allow them to take them..he concluded no broken nose. He was more worried about her cheek and eye. She's really banged up.
Broke our heart to see our little three year old so bruised. They came back and spent the day here just in case. With Tylenol and TLC she seems to be on the mend. Needless to say I managed nothing yesterday but playing with the grandbabies. Aside from the accident it was a perfect day.

So today I want to give you a taste of Marie Rose Dufour's book. I read her first book Fated Mates and it was great. Can't wait to get time to read Irish Rising. Oh and isn't the guy on the cover just yummy? :o) 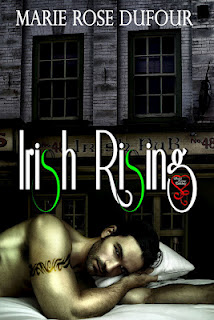 Famous romance writer, Kim Green went to Ireland with her two cousins to research the setting of her new book and have some quality girl bonding fun. She’s in the business of writing about love. She didn’t expect it find her on the street in a sleep Irish town with a sexy, “I want to drown in your chocolate eyes” pub owner.
Duncan Murphy never believed in the old family legend. The idea a trapped mermaid granted his family the ability to recognize their one true love was absurd to him until he spots a sexy American across the street from his pub. Something deep within him recognized her as his other half.
They’re drawn together in an explosive first encounter. Life is blissful until a misunderstanding threatens to tear them apart. Is their fragile newfound romance something legends are made of or the misguided belief in an ancient fantasy?

Kim walked and walked taking in all the local scenery. The sculpted hedgerows infused with red and white flowers. The shopkeepers sweeping the sidewalks in front of their stores, they were always quick with a greeting and even quicker with a smile. As she walked, she talked into her mini-recorder trying to capture as many details as possible. When she got back to her room later, she would transcribe her notes to be used later in her manuscript. Every once in a while she would stop to take some pictures since Kim found it helpful to surround herself with images that help her describe things in her stories.

Her walking slowed to a complete stop when she noticed a house for sale. As she peered through the gate in the hedges, she saw a wonderful stone house that was so typical in Ireland. Some people would say that the house needed a lot of work, but Kim only saw the possibilities. A cobblestone walkway led from the iron gate over an expansive front lawn, ending at an enormous wooden front door. Attached to each window were empty flowerboxes she could imagine them overflowing with a riot of colors. Kim checked the gate to try and get a closer look but it was locked. Too bad, she wanted to explore more of the grounds for her research. Maybe she’ll call the realtor and set up a viewing while she was still in the country.

“You’re not lost now, are you, luv?” A gravely voice startled her out of her revelry.

She turned around to see whom the voice belonged to when across the road she saw the hottest man she had seen in her entire life. He was lazily leaning in the doorway of the pub across the street. He had a white apron tied around his waist that tapered down from wide shoulders. In his hands he was drying a glass while he stared at her from a distance. His brown hair curled over the collar of his black shirt that was pulled taunt over the muscles of his chest. Peaking out from underneath one of the sleeves was a Celtic band tattoo. Kim whistled to herself. She was a sucker for a man with band tattoos. She wondered if he had any more hidden by his clothes.

Kim flashed him her sexiest smile. “No, not lost. Just dreaming.”

He slowly unfurled himself from the doorway and walked across the street toward her. He had the walk of a man totally comfortable in his own skin. A loose-legged swagger that made Kim’s insides do a nervous tap dance. Up close, he was much taller than he appeared from across the street. Kim needed to tilt her head back to look into his dreamy chocolate brown eyes. She was short, her license said that she was five-three, but she was probably closer to five-two in her stocking feet. He towered over her by at least a foot.

“Dreaming, huh?” He lifted her chin to stare deeply into her eyes. “Yes, I can see it. You have the eyes of a dreamer. You wouldn’t happen to be a dream fairy who has come along to invade all of my dreams, would you?”

Between his intense gaze and the hand gently touching her chin, he mesmerized her. “No, just a dreamer. I’m not here to invade anyone’s dreams.”

Something flared hotly in his eyes before he moved away from her. “Well now, that remains to be seen.”

The distance between them broke the spell and brought Kim back to her senses. She thrust out her hand to introduce herself. “Hi, I’m Kim.”

He took her hand within his large one, but didn’t shake it. He simply held her hand within his own, renewing the connection that flared between them when they touched before. His gaze heated as he scanned her face and returned to her eyes. The heat and intensity caused Kim to gasp out loud. No man ever looked at her like this before. Not thinking it possible, his gaze burned brighter after hearing her gasp.
Posted by Unknown at 6:55 AM