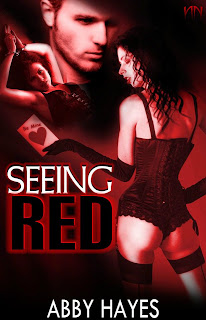 Abby Hayes latest book SEEING RED will have you trembling with anticipation of what will happen next as she weaves a tale of lust, light bdsm, ménage a trois and Valentine’s Day.
SEEING RED by Abby Hayes can only be purchased through Amazon
Synopsis
Three years ago when she opened her bar, Rage on the Water, her boyfriend at the time, a guy she thought she would spend the rest of her life with, dumped her that year on Valentine’s Day. Never a big fan of the holiday before, she now loathes it. Having gone through a bit of a wild phase these past years, she has given up dating altogether. Instead, she’s been exploring her wilder side, one where her kinks and more wanton interests prevail, in her apartment above the bar with a guy friend and at times, others he invites in.
This year on Valentine’s Day though, a conversation with her long time guy friend with benefits, Mark, lands her in a situation beyond any she has experienced before. There will be two men and two women for her to play dominatrix with. While ignoring Mark’s changing intentions toward her, like his invitations to go on an actual date, it being Valentine’s Day, she’s more than a bit excited to spank a few asses.
Tonight Shannon has four bodies to play with, but Mark’s are unnerving her. She goes with each whim of her body and mind, but will they expose her? Will she be able to still play her role well? Or will she give in to all that scares her? With bodies exposed and asses red, it is truly her heart on the line…
Excerpt
“Do your worst, Ms. Shan. Please.” His attempt at forcing his facial muscles to stop the grin was pathetic, and she couldn’t stop her own laugh. Again, the tight cord inside her loosened a touch. She pushed back her shoulders, reached out and unbuttoned and unzipped his jeans. Commando as usual, his cock popped out. To touch it now would give him pleasure, so she decided to withhold her urge to grab it, take it in her mouth and maybe even bite the yummy looking piece of meat. She stepped behind them all again, admired the four bodies a second, then yanked Mark’s jeans down. They bunched up around his thighs, bared his rock hard ass, nice full globes a beautiful shade of red and which were about to become redder. He’d had his breather.
She grabbed the leather paddle, quick to bring it against Mark’s now bare ass. Each smack of leather against skin, each mark it brought out on this un-tanned part of his flesh made her skin tingle. His ass cheeks clenched and relaxed, beyond hot. Not able to help herself, she bent down and bit him, the red skin warm against her lips. He let out a yelp of surprise maybe pain, and she giggled just a touch.
He turned to her, the way his face was scrunched up showing he was ready to play a little whoop ass on her, some fun retribution. They’d done it before, quickly switched roles. Had the situation been different she would have readily flipped the switch tonight too she knew, the mood she was in, up and down and all over the place.
“Thank You Ms. Shan,” he spoke her name through clenched teeth. The dark look behind his eyes, one sexy, one devious, made that invisible cord threaded through her un-wind a bit more, him wanting her. She could be honest enough with herself to know that she wanted that.
“You’re welcome. I can tell by your nicely formed erection, so hard, so red, the veins bulging…” She let the paddle glide over the top of his hard on, watching his red ass clench then. “Hmmm, I can see that you liked every minute of it. I’m all warmed up now and on to the others. Stay erect, and I mean your cock and your back, while I work. Eyes forward please. That means everyone, Scott.”
Posted by Unknown at 1:40 AM