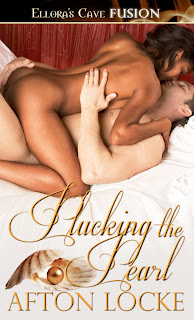 Blurb:
When Pearl's sheltered life shatters in the 1930s when her mother dies, her only option is to move in with poor family relations and shuck oysters in the local plant on Oyster Island, Maryland.
Determined to live a morally proper life, the last thing she wants is an affair with a white man, but Caleb, the plant owner, knows a pearl when he sees one. The successful widower is the “oyster king” of the island, but his intense desire for his forbidden new employee, a woman of color, threatens everything he’s built.

What begins as a private sexual liaison flowers into strong feelings that don't fit the social mores of the island. When their secret is discovered, they risk losing everything. They dared to pluck the pearl, but will their love be strong enough to keep it forever?


An Excerpt From: PLUCKING THE PEARL

“Show me the next step—with the oyster, that is,” she said quickly.

“Certainly.” He gripped her hand around the knife again and made deft movements to cut the meat from the shell. “Cut here and there. That’s all there is to it.”

“You make it look so simple,” she said, realizing he could pull her out of her shell just as easily.

When he stepped away from her, her legs nearly gave out. It was as if the hardness that had been nestled against her was the only thing that had been keeping her standing upright in front of the table.

He stepped beside her and she watched, fascinated, as he tipped the oyster half with the meat on it to his mouth. Watching the wet creature slide past the dark hairs of his moustache intrigued her in a way she couldn’t explain.

When he bent forward to kiss her, she was too aroused to refuse. His pale blue eyes came closer than they ever had and all she could do was stare helplessly into them. It was as if she floated higher and higher into the sky, never to set foot on firm earth again.

She felt his moustache first, hot and coarse, and then his lips, cooler and wetter. As his mouth worked over hers, something pushed between her lips. His tongue? She met it with hers, stroking with an abandon she refused to acknowledge as her own.
He tasted of the sea. No, not just one tongue. Two? She was too distracted by the heat boiling through her belly to care. When he removed his mouth, she realized he’d put the oyster inside her mouth.
Without thinking, she spit it out and it landed on the floor.
Caleb tipped his head back and laughed. It was a beautiful man’s laugh, musical and deep. Unfortunately she didn’t feel very amused.
“Now Ernie would have a fit if he saw you messed up his clean floor,” he said. “I take it you don’t care for oysters."

She crossed her arms. “No, I don’t. I thought you had swallowed it. And you shouldn’t have kissed me.”
He wiped his hand on one of the clean rags nearby and she did the same. Then he leaned an elbow against the table and looked at her.
“Why not, honey? We’re not married.”
“In case you haven’t noticed,” she said, “we’re not the same color—or social class, for that matter. You’re the owner of this establishment and I’m just a poor—”
He put two fingers to her lips to quiet her. The lingering scent of oysters drifted from them, making her breathe faster. She was beginning to like oysters…

http://www.aftonlocke.com/
Posted by Unknown at 1:05 AM