1) How did you start your writing career?


Though I’ve written pretty much my whole life, I’d say I became career focused when I joined Romance Writers of America and my local Virginia chapter in 2001. That’s when I really learned about the mechanics of writing as well as the business side of the publishing industry. Before that I had no clue how many manuscript pages equaled a full-length novel or what a synopsis or pitch was. It was about three years after joining that my first novel was released.

2) Tell us about your favorite character from your books.

I had a lot of fun writing Kitty from BLAME IT ON THE MOON. She could read minds and the new pub owner Haden had an awful lot on his mind, from stripping her naked to sprouting fur and fangs at the full moon. It was interesting keeping the balance between what Kitty could uncover with her “gift” while maintaining the suspense about Haden’s secrets, only one of which was his werewolf nature.

3) Tell us about your current release.

In BLAME IT ON THE NIGHT, Haden from the first book tries to discover the secret of his birth parents. Why would they knowingly put him, a werewolf, for adoption with human parents? But Haden’s story intertwines with two new characters, Guy Bastiaan, caretaker of pack lands, and Olivia Harris. Olivia burns with embarrassment at the memory of one sexy night at a party with Guy, but she needs his help to find her sister. Guy remembers that night, too, and the last thing he needs is to bring Olivia to where they left off…in the throes of ecstasy.

4) What is the hardest part of writing your books?

The hardest part is when I get into chapter three and discover I haven’t yet figured out a plot. I’m not a person who plans and outlines, which unfortunately brings me to a dead stop when I have to start making things come together properly. Eventually my muse finds the answers, but it would be a whole lot easier if I could start with a plan instead of making it up as I go along.

5) Where do you research for your books?

Researching for my books can be quite a lot of fun. While I’m writing, the research tends to be spur-of-the-moment questions that I find answers to online, but I like to go a bit farther afield when possible. Since most of my novels have an element of crime and suspense in them, the Writers’ Police Academy was a natural choice to learn more about the ins and outs of law enforcement. I rode along with a Sheriff’s Deputy during his evening shift, checked out a shallow grave (of a mannequin) in the pouring rain, and practiced handcuffing a fellow writer and vice versa. I took tons of notes on arson investigations and hostage negotiations. All in all, I had a blast, and the first hand experience helps me put a touch of realism into my stories.


6) What does your family think of your writing career?

7) Does your significant other read your stuff?

My hubby has read parts of my stuff. He’s just not a romance reader so he doesn’t stick to it, but he’ll read a scene if I need a guy’s opinion on something. It’s best that he not offer me critiques if he wants to maintain peace. I rely on writer friends for that.

I use a pen name which was actually going to be my stage name when I was a teenager. I planned to play guitar and travel with a band, maybe Duran Duran or Rick Springfield. Anyway, at some point my BFF and I decided we needed stage names and Shara Lanel was what I came up with. It just seemed natural to use it for my books.

I wanted to be an astronaut. I read all of my dad’s astronomy books and Odyssey Magazine. My dad used to take me out late at night to watch meteor showers and look at Saturn’s rings through his telescope. I longed to go to Space Camp. The downer came when I realized I absolutely hated math. But I got to take a brief mission in space when I wrote my novella THE MEN ON MARS.

10) What are your favorite TV shows?

Buffy the Vampire Slayer, Firefly, and Doctor Who top the list. I love TV and watch far too much of it, especially shows with supernatural and sci-fi elements. Apparently, I’m a nerd!

11) Do you have anything specific that you want to say to your readers?

I also spend way too much time on Facebook, so come by and say “Hi.” For excerpts and contests, drop by my web site: www.SharaLanel.com! 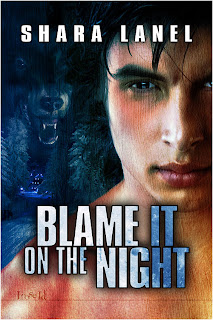 Blame It on the Night Blurb:

Human/werewolf relations were forbidden. Guy’s father had made that clear years ago, but Guy had come very close to disobeying with naïve, teenage Olivia. He’d barely kept his body under control, as he’d held her during her first shocking orgasm. Years later, on edge with anger, grief, and the pull of the moon, Guy knows she’s the last person he needs near him.


Olivia is overcome with humiliation at the mere thought of seeing Guy again, though he’s starred in all of her fantasies over the past several years, but she refuses to leave his doorstep until he answers her questions about her missing sister and the dead body found on his property. Problem is, he’s ordering her to leave while blocking the door, telling her to get lost while pinning her between his hard body and the table, saying he doesn’t know what he’s doing while his every touch takes Olivia closer to heaven.


Sometimes forbidden love is worth the risk, but sometimes it leads to revenge and murder.


Buy link: http://www.loose-id.com/Blame-it-on-the-Night.aspx
Posted by Unknown at 9:45 AM

Labels: Blame It On The Night, loose id, Shara Lanel