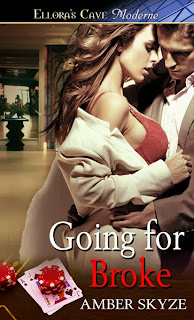 Put one foot in front of the other and soon you’ll be walking through the door.
Deacon rubbed his eyes. They burned from being sleep deprived and the bright lights didn’t help. It was nearing midnight, but who could tell in the city that never sleeps? He stopped to glance up at the majestic building. The four golden caps made it appear as if it were a true Palace. The design had been created with that in mind. Darius Burke had a dream. He’d wanted to build a casino that reminded people of royalty. He’d wanted them to feel like they were special when inside. For years he’d succeeded.
Put one foot in front of the other and soon you’ll be walking through the door.
The one verse of the incessant Christmas song filled his mind as Deacon climbed the stairs to casino. Sure he changed it a bit to suit his needs, but that was his prerogative.
The flight in from Hong Kong seemed to drag on longer than it should have, but he closed the deal. They would gain a foothold in Hong Kong with their latest fragrance. The time had arrived for him to close another deal. The most important one.
Put one foot in front of the other and soon you’ll be walking through the door.
Deacon adjusted the laptop bag dangling from his left shoulder. He lifted his right foot and placed it on the concrete stair. Gold speckles glittered the front staircases leading to the entranceway.
Each step he took was painful to his weary feet and heavy heart. He hadn’t stepped foot inside the casino or Vegas for that matter in nearly ten years. The day had finally arrived. He was coming home after many years away. Deacon Burke was one step away from reclaiming what rightfully belonged to his family – the Palace of Pleasure.
Though when his father owned the Palace the top floors known as the Pleasure part of the casino didn’t exist. Deacon could see his father rolling over his grave imagining the things that took place in the Pleasure area. Not that Deacon minded. Sex was an enjoyment of his. There was something about cherishing a woman’s body that brought out the animal instinct in him. He also didn’t mind doling out a spanking or two. Having a woman bent over, hands tied behind her back getting spanked, got him overheated every time.
He stifled a moan, while fighting the hard-on that grew in his black slacks.
Maybe he’d partake in a little fun before meeting with the current owner. Why not try out the merchandise? Not that it would change his mind on reclaiming the casino. It belonged to the Burke’s and Deacon would stake his claim, no matter what stupid stipulations they put on him.
Buy Link - http://www.ellorascave.com/going-for-broke.html
Blog- http://amberskyze.blogspot.com
Website – www.amberskyze.com
FB - https://www.facebook.com/amber.skyze
Twitter - @amberskyze