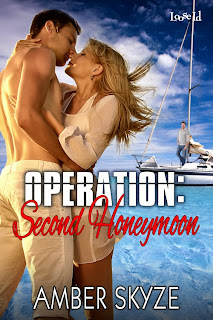 Owen inched his body closer. Avery turned to flee from him, but he was much quicker. He wrapped her in an embrace and dunked her under.
When she came up for air, she punched him in his arm, only to be met by a brick wall. The muscles in his biceps were made of steel.
“Ouch.” She shook her fist. “You don’t play fair.”
“Hey, I didn’t ask you to punch me. I could’ve told you to save your energy.”
Somehow she managed to slip away to the other side of the oval pool. Owen lagged behind, Avery couldn’t help but wonder if he sported an erection and that was why he didn’t bother following her. Temptation to look filled her, but she bit her lip instead and diverted her attention to the outside of the pool.
“Whatcha looking at?” Owen swam up beside her.
“Checking on the garden. Wanted to see if the veggies are growing,” she lied. “Hey, I need to ask you something.” Avery turned her head to look at Owen.
“Avery. Avery… How does your garden grow?”
“It’s bare,” she declared. She couldn’t believe the bold words had left her mouth. She’d just told Owen that her pussy was shaved. Cole would freak if he knew she’d been discussing something so private with him.
“Hmmm.” Owen turned and swam away, doing the backstroke.
Avery sneaked a peek of his hard cock outlined by his wet emerald swim trunks. It looked massive.
She groaned. This wasn’t going according to plan.
“I should be going back in. I can’t be away from work for too long.”
“What was that question you wanted to ask?”
“Do you know anything about…?”
“What’s going on here?” Cole asked, entering the backyard.
Oh fuck. What was he doing home so early?
“Hey, man. You’re wife offered the pool so I could cool off. I kinda pushed her in because she was being a sissy about getting wet.”
Cole laughed. “It’s about time someone showed her the proper way to get in.”
As Cole drew closer to the pool, she noticed a mischievous look in his pale blue eyes.
Cole Jackson, what in God’s name are you up to?
“I was just getting out. I have to get back to work.” She struggled up the ladder. For some reason, her legs decided they didn’t want to work anymore. She fell back into Owen’s waiting arms.
“Gotcha.” He smiled, and she felt that jolt of electricity shoot right to her core. She wasn’t sure what was going on, but she knew she had to get out of there. She hadn’t felt that attracted to another man in over twelve years.
“Thanks.” Avery moved from his grip and flew up the ladder and out of the pool. She wrapped her slender body in the beach towel and off the deck she went.
“No kiss for your husband?” Cole called after her.
“In the house, honey. I think I’m late for a meeting.” The only meeting she was late for was one with her vibrator. If she didn’t orgasm now, she’d explode.


The ache between her legs needed to be dealt with. Her heart pumped wildly. Her body felt like it’d been teased and tortured and left to fend for itself when it came time for an orgasm. Owen had her libido in overdrive.
Posted by Unknown at 3:00 AM