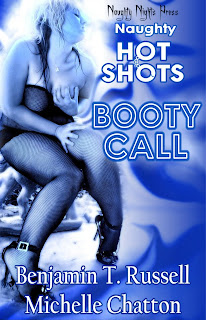 http://www.amazon.com/dp/B007BR20GC
1. Tell us about your favorite character from your books.
Michelle Chatton: For me it is a tie between Vicky, the Hot Sexy Bi-BBW and Winston our Sexy Dom.  If push came to shove **giggles**   I would just have to chose the gorgeous Dom.  What woman wouldn’t want to be with an Alpha male that knows his way around a woman’s body?  Plus I love his openness about his sexuality.
Benjamin Russell: Ok, surprise-surprise, I infused some of me into Winston, so I’m partial to him, but my absolute favourite character is Cherry.  I love Cherry’s zest for life and how she lives in the moment.  I suspect we will see more of Ms. Cherry in future Booty Call instalments.

2. Has someone been instrumental in inspiring you as a writer?
Benjamin Russell: My Father, he was a voracious reader and he taught me to love the written word. His philosophy was that he didn’t care what I read; comic books, the daily newspaper or his secret stash of X-rated paperback books (he knew I read them, but he pretended not to notice) he just wanted me to read.  Since I’m an author of Erotica, I guess you’ve probably figured out that I gravitated to his steamy paperback books.
Michelle Chatton:  Well I have always loved books, some say too much, so I have always been fascinated with the craft.  I wrote some short stories for some friends and they thought I should try it.  But to be perfectly honest, if it wasn’t for Benjamin I would still just be “fascinated”.   He saw something in me that I didn’t then kicked my arse into trying.  We just clicked in our thoughts and Voila!... here we are.
3. What does your family think of your writing career?
Benjamin Russell:  My family has not embraced erotica as a genre they like to read. If my Father were alive, he'd be giving me high fives and ideas for new stories. My Mother on the other hand, who is still alive, I think she'd be calling Ghost Busters or an Exorcist if she read one of my stories. Bottom-line, I write for me and I write the kind of stories that I enjoy reading.
Michelle Chatton:  My whole family knows what I am doing and are encouraging.  Most, actually probably all of them, won’t read it.  For them Erotica isn’t what they read, but they still want me to be happy and successful.  They know it is just the beginning and that I will write different genres as time goes by.


4. Do you have critique partners or beta readers?
Michelle Chatton: I believe that we are each other’s critique partners.  Benjamin is my mentor and I often look to him for guidance.  We also have good friends who did some editing for us.  Elicia Seitz Stoll edits for a living but was a Sweety and gave ours a look over for us.
Benjamin Russell:  As Michelle stated, we critique for each other and in addition to Elicia, I also rely on my friends Jade F. Baiser and Katie Harper to give me feedback.


5.Who are your books published with?
Benjamin Russell:  Naughty Night Press( NNP ) is our ePublisher and we’re having a ball working with them.
Michelle Chatton:  Benjamin was the one who was instrumental in finding us the awesome ebook publisher Gina Kincade.   She is a fellow Canuck and a great strong woman who cares about her writers.


6.Plotter or Pantser? Why?
Michelle Chatton:   Ok, till I met Benjamin and was taught to do an outline, I would have thought that “pantsers” were the people who would yank off people’s pants and throw them in trees.  So, this is for him to answer. LOL
Benjamin Russell:  Michelle and I work from a story outline that I do for each of our stories. It starts with a story overview/synopsis, with character bios and a suggested chapter-scene flow.  In order for us to work together seamlessly, and we’ve been told that it’s hard for anyone to tell the story was written by two different people, we needed an outline, roadmap guide us. We decide at the start who will write which chapter or scene and then I put it all together at the end. I think it worked well for the first story and we’re following the same approach for our planned next three stories.  One caveat, the outlines are not etched in stone, once we start writing - the characters have a way of taking us where they want to go.


7.Do you listen to music while writing? If so what?
Michelle Chatton:  Yep, I do.  I need something with a strong dance beat.  I have very eclectic tastes in music, but I love Cee Lo Green, Prince, Maroon 5 and my favorite is Nickelback.  They are originally Canadian Prairie boys and Holy Hell that lead singer can get me in the mood in just by saying..”Hello”.
Benjamin Russell: Michelle and I have similar tastes in music. I can’t write a sex scene without some Prince playing on my iPod.

8.Morning Person? Or Night Person?
Benjamin Russell:  Morning – My wicked Muse wakes me up in the middle of the night whispering new story ideas in my ear and those ideas are freshest in my mind early in the morning.  My Muse, I call her Jezebel, doesn’t like to share me with anyone, not even sleep. You can find out more about Jezebel by clicking on the embedded link in her name.
Michelle Chatton: I am much more productive at night...at a lot of things. ;)   But I am learning to get up early and work with my co-author’s schedule.  If you gave me a choice..I would be like a Vampire and sleep all day.


9.What would we find under your bed?
Michelle Chatton:   Well...umm, well... Oh What the Hell.  Under mine, you would find my treasure chest full of toys. Just like our character Vicky, I am a strong believer in self pleasuring.  It is a great way to relax and if I was in a relationship it would be an awesome way to “add” to the fun.  Oh and you might find some “dust bunnies”, cleaning house isn’t a major priority for me. **blushes**
Benjamin Russell: Oh wow, I don’t know how to compete with Michelle’s answer.  Ok, let me crawl under there and see what I have.  Hmm, a jar of peanut butter( creamy ), a $100 bill( She said she’d left me a tip ) and a spray bottle of Swiss Navy lube( great stuff ).
10.Do you have anything specific that you want to say to your readers?
Michelle Chatton:  I want to tell them how grateful I am to them for giving our new and first book a chance/read.  I love hearing from our fans and if they wanted to get in touch to give some ideas or suggestions for future Booty Call adventures, that would be awesome.  I especially want to tell all the BBWs out there that I am going to keep writing about us.  After all, us Big Girls like hot loving and are also Sexy as Hell.
Benjamin Russell: I ditto what Michelle has said. We’re going to be writing more stories with BBW as the main characters.  It’s our belief there is a large audience of sexy BBW’s out there who want to read about someone they can identify with. Muwah
Naughty Hot Shots: Booty Call by Benjamin T. Russell and Michelle Chatton
Purchase your copy at Smashwords or at All Romance Ebooks.
Blurb:
So what is a strong-willed, Bi-BBW supposed to do when she decides she wants to have a MMF ménage to celebrate her birthday? She makes a Booty Call to her bi-sexual male co-worker and her hot Dom ex-lover.
Victoria Carter has finally broken free from a destructive relationship, now she wants to explore her sensuality and her sexuality to the fullest. Ready to meet the world head on, this is just the beginning of her sexual adventures.
Excerpt:
Vicky arched her back and her head lolled to the side. “Winston, ooh baby, I am soooo close. If you keep doing that I am going to come, I am going to come so hard.” She whimpered breathlessly.
Steel vibrated in Winston’s voice. “No, you don’t come until I tell you to.” The touch of menace in his voice sent a furtive thrill to Vicky's moist core and surprisingly, she found the hint of danger in his voice to be arousing.
“Yes Sir,” she said, assuming the submissive role easily from pure habit.
Vicky let out a long sigh as he slowly pulled his finger from her pussy’s clinging grasp. He stared at his cream covered finger lovingly before he turned his gaze on her and met her eyes directly.
Transfixed, she watched him stick his finger in his mouth and suck off all her cream. A look of crazed lust washed over his face as he tasted her juices and the erotic expression sent undulating ribbons of desire shimming down her spine. She peered at him through hooded eyes as he dipped a finger back inside her. Vicky’s eyelids fluttered and then closed as another wave of pleasure racked her body.
This time, when he withdrew his finger glistening with her dew, he held his hand up to her face. Every cell in her body screamed for her to devour his finger, but she forced herself to wait. He didn’t have to say it, but she wanted him to give her permission to do it. He leveled an icy stare at her and his commanding body language spoke to her heart.
Tonight she wasn’t the hotshot attorney who intimidated weak men with her intelligence, self-confidence and plus sized body. Tonight – in this bed – she wanted to be a desirable and sensuous woman, giving her trust to a real man. If only for one night, she wanted a man like Winston to dominate her and use her as he pleased.
Her eyes were soft, open and begging for his approval. “Please.”
“That’s good baby, you’re learning.” He placed his finger at the opening of her mouth and Vicky smiled when she inhaled her scent. She greedily wrapped her lips around his finger and sucked it clean.
He moved to the end of the bed and dropped to his knees so he could look between her legs. Moisture oozed from her and he froze for a moment as his cock bucked at the sight. He stared at the tantalizing view of her sex, wet with cream. He became enthralled at the promise of emptying the creamy contents of his balls in her, or all over her.
He looked up and captured her eyes. “Vicky, tell me what you want.”
She hesitated for just a moment. “Please.”
“Please what?” The displeasure in his voice was evident.
“Please make me come.”
He smiled. “That’s what I needed to hear.”
Winston began to lick his way up the inside of her legs and made a beeline straight for her beckoning little pussy. Normally, he would have teased her even more, but since today was her birthday and she’d been a good sub up to that point, he decided to give her what she needed.
What are you waiting for? Go grab your copy now! LOL
http://www.amazon.com/dp/B007BR20GC